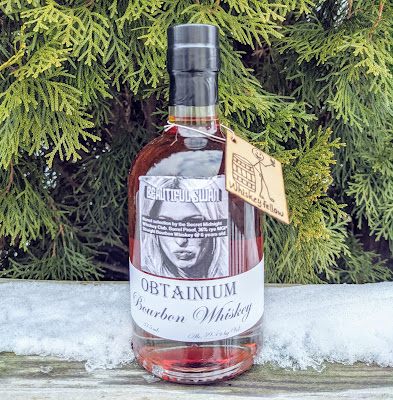 MGP is the big boy on the block when it comes to sourced whiskey in the United States. There are some other big names who provide whiskey to brands, but no one really does it at the same level. A handful of years ago, brands were shy to admit their whiskey was really MGP distillate. Folks frowned on MPG.  Oh, wonderful, another MGP Bourbon. Yawn.
But then, something almost magical happened. It isn't that MPG necessarily got better, but it developed a cult following. Now, when someone bottles MGP whiskey, they either come right out about it or they make it obvious in some other way. Excited consumers now ask, Is this MGP? and hoping the answer is Yes.
In Bettendorf, Iowa, there exists a place called Cat's Eye Distillery. It buys a lot of MGP distillate. Sometimes it is Rye, sometimes Bourbon, sometimes Light Whiskey. Gene Nassif of Cat's Eye is prolific on social media and doesn't hide the facts.
If you cross over the Mississippi River into Wisconsin and head into Appleton, you'll find Niemuth's Southside Market. Niemuth's picks a lot of interesting barrels and uses The Secret Midnight Whiskey Club to do its barrel selection. In full disclosure, I've been involved with a handful of their picks. Not all, not most, just a handful.
Today, I'm reviewing Obtanium Bourbon Whiskey, which is a Niemuth's pick called Beautiful Swan.  The Obtanium label is owned by Cat's Eye.  It consists of an MGP Bourbon utilizing its 60% corn, 36% rye, and 4% malted barley mash and was aged for six years. It weighs in at 118.2°, and you can expect to pay $29.99 for a 375ml bottle.
I'd like to thank Niemuth's for providing me a sample of Beautiful Swan in exchange for a no-strings-attached, honest review. I'm ready to #DrinkCurious.
Appearance:  In my Glencairn glass, Beautiful Swan was, well, a beautiful burnt umber color. It produced a medium rim and watery, fast legs that sped back to the pool of liquid sunshine.
Nose:  In an unusual fashion, the first aroma to hit my nose was nutmeg. Nutmeg is typically a comparatively subtle smell against others, but this time it jumped out quickly. I found cinnamon, charred oak, cherry, and plum as well. When I breathed the vapor in my mouth, I got a cherry vanilla blast.
Palate:  I discovered a creamy, full-bodied mouthfeel that offered a distinctive Indiana hug. Fruity flavors of cherry, plum, and berries were on the front of the palate. As it moved to the middle, I tasted caramel, nutmeg, and English toffee. Then, on the back, I experienced rye spice, cinnamon, toasted oak, and sweet tobacco leaf.
Finish:  Things started off sweet with cherry, then earthy with dark chocolate, and finally spicy with cinnamon and rye. As those two faded, clove came in late and offered an overall longer finish.
Bottle, Bar, or Bust:  In my experience, six years seems to be a nice sweet spot for MGP 36% rye Bourbons. That's not to say they're all good because they're not. But, Beautiful Swan fits the bill and I sure enjoyed the heck out of it. I'm confident you'll find this to be a good Bourbon, and as such, it earns my Bottle rating. Cheers!
My Simple, Easy to Understand Rating System
Niemuth's Southside Market is located at 2121 S. Oneida Street in Appleton, WI.
Posted by Whiskeyfellow at 6:00 AM