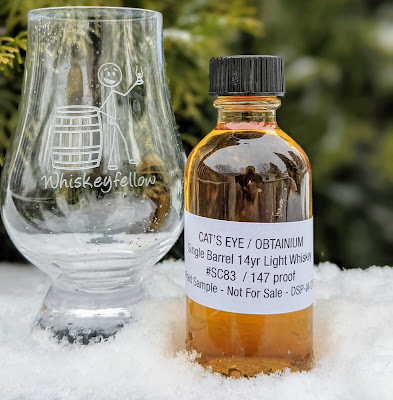 What isn't shown in the photo above is the massive snowflakes coming down. Yeah, it is snowing again. A very fair question would be, Why is this Whiskeyfellow character out in a snowstorm taking a picture of whiskey? Keep looking at the photo, specifically where it mentions the proof. That says 147°, and this would be one of the highest-proof whiskeys I've ever tried.
Another fair question is, What is light whiskey? Is that diet whiskey?  Well, no.
Light whiskey came into existence in 1968 because consumers were moving away from Bourbon and more into clear spirits such as vodka or gin. Light whiskey is distilled between 160° and 190°.  Contrast that with Bourbon or American Rye, which tops out at 160°.  It must be aged in used, charred oak barrels or new, uncharred oak. Most distilleries didn't let it age very long, but then light whiskey fell out of favor, and the stocks were left hanging around, mostly ignored and forgotten.
What we have here is a light whiskey distilled by MGP of Indiana and bottled by Cat's Eye Distillery out of Bettendorf, Iowa. Packaged with its Obtainium label, this barrel sat in the MGP warehouse for 14 years. That's not all, this is a single barrel offering, and as such, it is the pure experience of what light whiskey can become. It retails for $54.99.
I'd like to thank Cat's Eye Distillery's Wisconsin distributor for providing me a sample of this whiskey in exchange for a no-strings-attached, honest review. Let's #DrinkCurious.
Appearance:  In my Glencairn glass, this whiskey presented as a rich, caramel color. The rim was so faint, I had to squint to pick it out. A wavy curtain of legs, if you could call them that, dropped back to the pool.
Nose:  Aromas of brown sugar and caramel hit my olfactory senses. I also smelled orange peel, nutmeg, and cinnamon. When I drew the vapor in my mouth, I tasted butterscotch.
Palate:  Shockingly, my tongue was not set on fire while sipping this. I admittedly psyched myself out preparing for it. It was definitely warm and thin. I also found it to be a caramel bomb from start to finish. The front added butterscotch and brown sugar. At the middle, I experienced only vanilla. The back featured notes of oak and cinnamon.
Finish:  I felt like I was sucking on a cough drop, a menthol blast literally cleared my sinuses. The finish lasted for what seemed to be forever. Caramel and butterscotch continued until the very end. Toasted oak made a brief appearance and cinnamon red hots carried the remainder. While spicy, I need to stress it wasn't hot.
With Water:  I don't normally add water to my whiskey unless I'm curious what would happen. Something that pushes the Haz-Mat envelope is an opportunity I didn't want to pass up. Some people add a splash of water. I'm pretty Type-A when it comes to adding water and I use an eyedropper, and I always measure out two drops of distilled water.
Nose with Water:  The brown sugar and butterscotch were magnified, as was the caramel. The spice completely fell off, and the orange peel became candied. Overall, the nose got sweeter.
Palate with Water:  The mouthfeel became thick and creamy. The caramel bomb vanished, while the cinnamon spice and oak took center stage.
Finish with Water:  Black pepper, clove, and cinnamon spice created a very long finish. Absolutely shocking was the finish got both hotter and spicier, almost painfully so. My hard palate was buzzing despite the fact I only took a simple sip.
Bottle, Bar, or Bust:  With water, I did not enjoy this light whiskey at all. The water ruined it. But, drunk neat, it was tasty and surprisingly easy to drink. I got past the menthol blast and was able to savor the flavors, perhaps because my sinuses were cleared. If you drink whiskey neat, I think Cat's Eye has a winner here. If you are into adding water, this may be one to avoid. I'll stick with the way I normally drink whiskey and crown it with a Bottle rating. Cheers!
My Simple, Easy to Understand Rating System
Posted by Whiskeyfellow at 6:00 AM