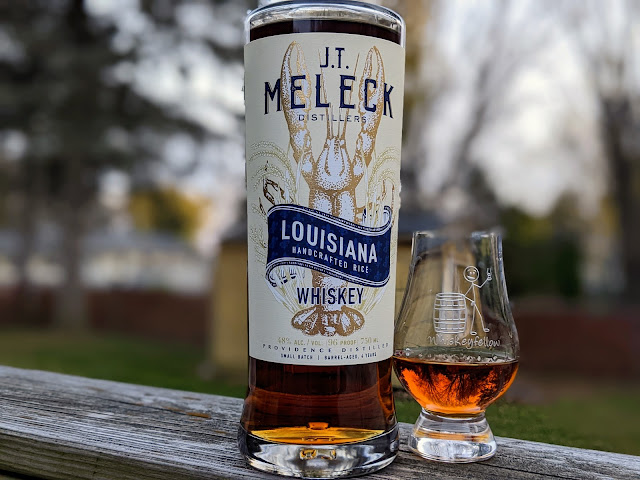 It is always (well, mostly always) cool to be first at something because if it turns out to be good, you get bragging rights. Some people may believe there are only so many things you can do with whiskey and that most ideas are already in production.

Just because you believe something to be true doesn’t make it so, and, as a reviewer, I see a ton of innovation. Of course, innovation doesn’t translate to something being good; it just means it is unique. I’ve run into some undrinkable stuff that was a product of a new-and-improved way of doing something.

J.T. Meleck Distillers traces its roots back to 1896 when John T. Meleck took 20 acres of Louisiana marshland and farmed rice. Fast-forward to 2022, and Meleck’s descendants are still growing rice on those same 20 acres. One day, Mike Frugé decided to distill that rice, bringing us full circle to this grain-to-glass whiskey.

Mike didn’t start with whiskey. The first J.T. Meleck spirit released was rice vodka in 2018. That earned him attention and a handful of awards from the American Distillery Institute in 2020.

“We´re proud to take our rice from grain to glass. We work the dirt and grow the seed, just like Uncle John did. That’s why we’ve named it J.T. Meleck. Because our crazy idea has managed to create a whole new Louisiana classic. One that goes straight from our farm to your front porch.” – Mike Frugé

Today we’re exploring J.T. Meleck American Rice Whiskey. It is distilled from a mash of 100% rice and rested for almost five years in 53-gallon American oak barrels. It does carry a four-year age statement, is packaged at 96°, and you can expect to pay about $47.00 for a 750ml bottle. Distribution is all over Louisiana and limited in Colorado. It is also the first American 100% rice whiskey produced on a commercial level.

I’ve had rice whiskeys; however, they were Japanese. I have fond memories of those tastings. Frankly, I don’t expect this whiskey to be anything like its Japanese counterpart. But I am ready to #DrinkCurious and taste what it is all about.

Before that happens, I must thank J.T. Meleck Distillers for providing me with a sample of this ground-breaking whiskey in exchange for a no-strings-attached, honest review.

Appearance: J.T. Meleck presented as burnt umber in my Glencairn glass. Poured neat, it created a fragile rim. That, in turn, led to slow, thick legs that crawled back to the pool of liquid sunshine.

Nose: Smells of vanilla and caramel are almost requisite of Bourbon. I wasn’t prepared for them to be in this rice whiskey. Toasted oak, coconut, and nutmeg followed, along with a bit of cherry. When I drew the air into my mouth, banana and custard tangoed across my tongue.

Palate: There was a silky texture that carried some heft. The front of my palate plucked butterscotch, cinnamon, and cocoa. At mid-palate, flavors of dark chocolate, leather, and torched caramel, while the back offered allspice, clove, and dry oak.

Bottle, Bar, or Bust: This rice whiskey drank at its stated proof and featured more flavor than I would have ever imagined. As I suspected, it was nothing like the Japanese versions I’d tried. J.T. Meleck American Rice Whiskey is kinda-sorta like a blend of Bourbon and Rye. The more I sipped it, the more flavorful it became.

I’m curious if American rice whiskey will catch on. If J.T. Meleck is an example of what the category becomes, it’ll be a winner. I commend Mike Frugé for doing something decidedly different, and I’m thrilled to have this in my whiskey library. If you’ve not figured it out, it takes my Bottle rating. Cheers!

EDIT TO ADD:  It has been brought to my attention that Golden Beaver Distillery of Chico, California, has also released 100% American rice whiskey. Per Golden Beaver, its release date was November 19, 2021. J.T. Meleck released its first batch on November 16, 2021.

Posted by Whiskeyfellow at 12:00 AM 3 comments: