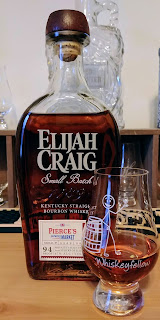 One of the great joys of the Wonderful World of Whiskey is the invitation to do a private barrel pick. It is not only a lot of fun but a great honor.  And, if you're very serious about picking barrels, you have to go in prepared to reject all the samples if they won't be something you're proud to have your name associated with.


My goal when picking a barrel is to find something unusual. Some stores or bars like "safe" picks, where they know it will taste just like the standard release.  I typically reject those.  After all, if it isn't something special, why bother going through the trouble?


Last fall I was invited to pick a barrel of Elijah Craig for BWP - Pierce's Express Market in Baraboo, Wisconsin. The goal was to have this selected and in the store by Christmas. As it turned out, BWP received the barrel just a couple weeks ago. BWP has this single barrel Bourbon listed at $29.99 and it carries no age statement.


The good news is it has been so long ago since I picked this, I don't completely remember what was picked. That's not quite going into this blind, but it is enough to where any notes I had then are long forgotten, so this is almost a new Bourbon to me. Time to #DrinkCurious...


In my Glencairn, the appearance was typical Elijah Craig's deep amber. It left the thinnest rim on the glass. The rim hung on for several moments before it created thick droplets that just would not release back to the pool of liquid sunshine.  This was a surprise because when I tasted the samples, it was with plastic cups.


After letting the glass rest for about ten minutes, thick fruit permeated the air around me. As I nosed the glass, it started as berry heavy. Underneath that berry was aromas of vanilla and oak.  When I inhaled through my lips, fresh cream rolled all over my palate.


The initial mouthfeel was like the rim:  incredibly thin.  A subsequent sip was much less so, and the more I sipped the creamier it became.  It could have been a factor of the tingling on my hard palate, but I distinctly remember the same experience with the initial sample. Vanilla was up front, followed by red fruit and black pepper at mid-palate. The fruit gave way to oak, but the black pepper remained. There was, interestingly enough, really nothing on the back.


The very long finish consisted of the charred oak you'd normally expect from Elijah Craig. But, added to that was clove that hung on to the front, eventually yielding to a sweet caramel before melting away. I chose the word melting purposefully because that's the best description available.


Finally, this one drinks heavier than the advertised 94°. It doesn't "burn" but it definitely grabs the attention of your hard palate.


Bottle, Bar or Bust:  Let's get real here. I picked this, obviously, I'm biased.  Remember my goal:  I always want to find something unusual or unique. The BWP - Pierce's Express Market pick fits that description. I am honored to have been a part of this pick and this absolutely rates as a Bottle.  If you're in Wisconsin, make the drive to Baraboo. You'll be happy.


Cheers!
Posted by Whiskeyfellow at 6:00 PM