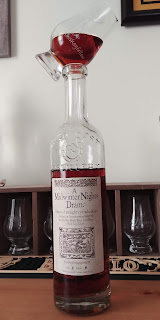 Yes, Christmas has passed, but that doesn’t prevent you from enjoying it year-round if you’d like. Oh, sure, you won’t necessarily have presents under the tree, and you don’t have to listen to the endless yuletide tunes, but, on the plus side, you also won’t need a reason for the season.

Have I fallen off my rocker? Why am I talking about Christmas in March?

I was introduced to High West Distillery’s A Midwinter Nights Dram back at Act 1. My friend, “Made Man” Bob Howell of Sips Suds & Smokes poured me a glass way back when it came out and he said, “This tastes just like Christmas in a bottle!” At that time, I had never heard of High West, but I was already interested after that first sip.

Each year, A Midwinter Nights Dram takes on a new Act. Act 1 was the initial release, Act 2 the following year, and so on. Each Act is different from one another - sometimes slight, sometimes huge.

Today I’m reviewing Act 6, Scene 6, which was the 2018 release. One of the nice things about High West is their transparency. Act 6 is simply High West’s Rendezvous Rye which was then barrel-finished in French Oak port barrels. High West’s 2018 release of Rendezvous Rye is a blend of Straight Ryes ranging in age from four to seven years. One recipe comes from MGP of Indiana, using a mash of 95% rye and 5% barley, the other is 80% rye and 20% barley distilled by High West.

Retail on A Midwinter Nights Dram is anywhere from $89 to $99. This is a limited release whiskey, there are still 2018 bottles out there, but they are getting more difficult to find. It is proofed at 98.6, the same as the human body, and this is consistent throughout the Acts.

How will Act 6 stand up? Will it still be like Christmas in a bottle? The only way to find out is to #DrinkCurious…

In the glass, Act 6 appeared as a very deep, dark amber. It left a very thick rim on the glass and produced fat legs that took a medium pace back to the pool, suggesting a medium body.

Cinnamon was the very first thing to hit my nostrils. In fact, cinnamon was all over the entire nosing zone. At the lower end, the cinnamon had a nutty quality, at the middle, it was baked goods, and at the high end, the cinnamon blended with cherries and port. There was even a slight piney aroma hidden under the cherries and port. When I inhaled through my lips, the pine was more evident, along with creamy milk chocolate.

The mouthfeel was thicker than I was prepared for: prior Acts were not as heavy. Just as cinnamon dominated the nose, fruit controlled much of the palate. Up front, it was cherry and sweet, dried fruit. The middle was a marriage of raisin, dark chocolate, and nuts. All of that yielded to a return of cherry and cinnamon rolls on the back.

The finish was certainly different. It started off with disappointment because it was so short. But, then it was like finding an overlooked present under the tree. It all came racing back with dry wood, clove, and the return of cinnamon and held on for several minutes.

Bottle, Bar or Bust: Part of this challenge was to discover if Act 6 held up to the Christmas in a Bottle standard. Looking over the tasting notes, I’d say Act 6 fits the bill almost perfectly. While Act 6 isn’t my favorite of the series (that honor belongs to Act 2.2), it is nonetheless delicious and fun to sip. As such, it earns the coveted Bottle rating. I’m blessed with still having three Acts in my library and I’d highly recommend adding Act 6 to yours if you can still find it.

Posted by Whiskeyfellow at 5:37 PM