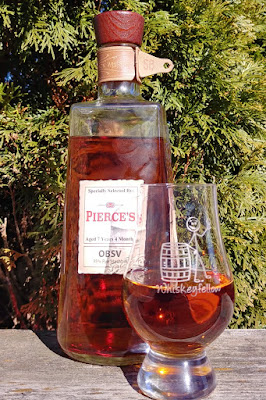 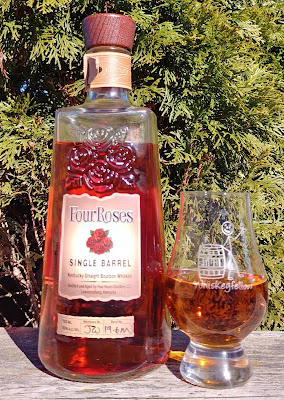 Four Roses Single Barrel picks can be a blast. The first barrel pick I was ever involved in was a Four Roses pick and it is one of my better life experiences. One of the reasons Four Roses is such a different, exciting pick is they have ten different recipes from which to choose, whereas if other distilleries have that many, the fact eludes me.

Today I'm pouring an OBSV store pick for BWP Pierce's of Baraboo, Wisconsin. This is a 100° Bourbon that has been aged seven years and four months and retail is $39.99. This will be an interesting experience because I don't typically pour 100° Four Roses and I've never had such a young barrel pick from them. However, in reality, age is just a number and while folks typically seek out older whiskeys, there are excellent younger whiskeys and terrible older ones, and vice-versa. It all depends on the individual barrel. This particular barrel is 19-6M and comes from Warehouse JW.

Everything boils down to how enjoyable a whiskey is and as such, it is time to #DrinkCurious.

In my glass, the appearance was a rich caramel color. It left a very thick rim on the wall of the Glencairn with slow, fat droplets that I wouldn't really describe as legs because they never really made it back down to the pool. They just stuck.

The nose was light and delicate. I immediately questioned it and dismissed the same as I reminded myself this was not barrel proof Bourbon. The initial aroma was very fruity, more than I expected from V yeast. Caramel and vanilla hid beneath the fruit. Underneath that was a slight spiciness of the rye. When I inhaled through my mouth, it was rich vanilla.

The mouthfeel was softer than I expected. Again, this isn't barrel proof. This pick was doing an excellent job at challenging my preconceived notions. It was light and oily and coated my tongue. Flavors of oak quickly gave way to the rich fruit. Mid-palate turned to vanilla and allspice. The back was clove and oak. It was interesting how the oak started and ended the cycle.

The finish was extremely long. It didn't burn but it definitely warmed. The oak hung around, but so did the clove and allspice. It took almost five minutes before the Energizer Bunny finish gave up the ghost and melted away.

Bottle, Bar or Bust:  I was skeptical. I avoid 100° Four Roses because I love the barrel proof versions. Saying that this one has me damned curious about what I've missed and overlooked in the past. Shame on me for that. This OBSV was very enjoyable and I'm going to open my eyes and include 100-proofers as I hunt down store picks. Maybe they won't all be this enjoyable, but the BWP Pierce's pick is getting a Bottle rating from me.

Posted by Whiskeyfellow at 5:23 PM