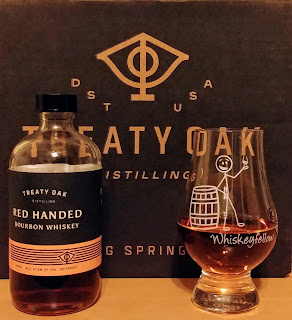 I was invited to write a review for Manliness is Next to Godliness...


In today’s booming “Wonderful World of Whiskey”, there are some distillers that engage in smoke and mirrors. They’ll create a fascinating backstory, along with a smattering of tall tales. They want to lead you to believe that the whiskey behind the label is their grandpappy’s grandpappy’s secret recipe.

I’m going to tell you right now that most have NOT been handed down through generations of distillers. In reality, they’ve purchased someone else’s whiskey. While they may do something unique during the aging or finishing process, they’re still claiming it is their own. That’s not right and a few notable distillers have been nailed for breaking the rules on this.
It is a breath of fresh air to come across full transparency. Not only does it make my job as a reviewer easier, but it also earns a certain aura of respect.  One such example is Treaty Oak Distilling out of Dripping Springs, Texas. Treaty Oak stands out as a shining example of the right way to do things. The distillery not only tells you they’ve sourced the whiskey, but they’ll also tell you exactly where they source it from.
The remainder of the review can be read on the M.I.N.G. website.
Posted by Whiskeyfellow at 3:43 PM