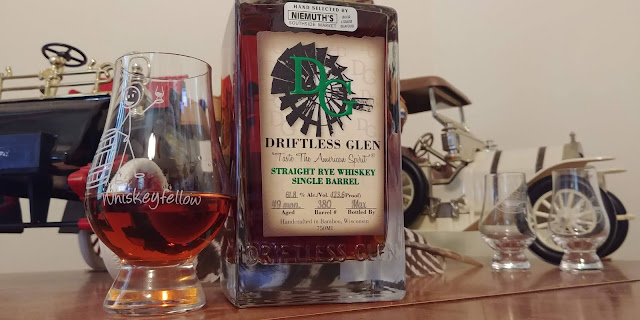 I often find myself gravitating to "store picks" of certain brands of whiskeys instead of just buying standard releases.  Examples of this include Four Roses, Elijah Craig, Buffalo Trace, and Driftless Glen.
Driftless Glen? You've not heard of that?  If you've not, you soon will. Driftless Glen is a distillery (local to me) in Baraboo, Wisconsin. They've been in business about five years, they distill a variety of spirits, but the two that interest me are their Bourbons and Ryes because, you know, whiskey.  I've been involved with barrel picks from Driftless Glen and I've seen how quickly this little distillery has grown in popularity across the country.
To me, there are two major categories of American Rye. Oh, there are subcategories as well, but they all seem to boil down to young and old Ryes.  Older Rye is typically more mellowed and younger Rye is generally bolder.  I happen to enjoy both and don't compare the two against each other because that's really unfair.
Recently I acquired a bottle of a single barrel pick for Niemuth's Southside Market, located in Appleton, Wisconsin. This bottle was provided to me in exchange for an unbiased review, and I thank them for this opportunity. This comes from Barrel 380, where the Rye aged 49 months. It was bottled at a barrel proof of 123.6°. Like all Driftless Glen Ryes, it is made from a mash of 75% rye and 25% malted barley. Niemuth's sells this for $54.99 per bottle.
Appearance:  In my Glencairn, this Rye presented as a deep, very dark amber. It created a thin rim that led to fat droplets to quickly work its way back to the pool of liquid sunshine.
Nose:  Aromas of fruity rye and floral notes were immediately evident, even before I brought the glass close to my face. Underneath those was light oak and cinnamon. There was also a hint of ethanol. When I inhaled through my lips, it was all dark chocolate.
Palate:  The mouthfeel was thin but coating. On the front, there was the obvious spicy rye which gave way to strong walnut. Mid-palate, I picked up coffee and tobacco leaf, both of which continued on the spicy theme. But, on the back, it was the rich, dark chocolate to even things out.
Finish:  Clove, rye spice, and smoked oak danced along the back of the throat for a very long finish. While the rye spice and oak eventually waned, clove continued to build well beyond.
Bottle, Bar, or Bust:  There are many people who have a rough time shelling out $55 for a four-plus year Rye. I would still consider this to be a younger Rye, and if that's not your thing, then you could take a pass but I believe that would be a mistake. You also aren't going to find this sitting at your local watering hole. I really enjoyed this Full Boar Driftless Glen pick and am very happy to have it in my library. As such, it earns the coveted Bottle rating. Cheers!
My Simple, Easy to Understand Rating System
Posted by Whiskeyfellow at 10:12 AM