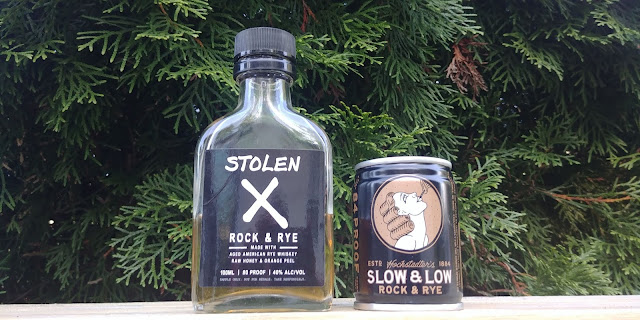 As much as I love whiskey, my experience with whiskey cocktails is fairly limited. I like a good Old Fashioned.  I've enjoyed Manhattans.  There's been a few more, but for the most part, I just prefer my whiskey neat.

Recently, I had the opportunity to try Rock & Rye.  If you're not familiar with it, in short, it is a mixture of Rye whiskey and rock candy.  There can be other ingredients as well, but those two are the main ingredients.

I've had a can of Hochstadter's Slow & Low in my liquor cabinet for quite a while.  My wife picked it up and it has just been sitting there.  I've not had any real desire to open it up.  However, the folks at Stolen Spirits were kind enough to send me a sample of Stolen X for a no-holds-barred, honest review. Considering the fact I've never had Rock & Rye before, I felt a review would be baseless without something to compare. I remembered that lonely can of Slow & Low and decided a head-to-head tasting would be the fairest approach.

And, to be consistent, I used the same Norlan Rauk heavy tumbler with both on two different days. 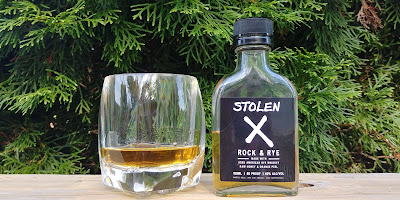 First up was Stolen X.  Stolen X is made of American Rye aged "over two years," fresh orange peel and organic raw honey.  There is no mention of rock candy in it at all, which is interesting.  It is bottled at 80°. Stolen X is available in 100ml cans, and 750ml and 1-liter bottles. A 750ml on average runs about $23.00.

The appearance was an orangish-amber and was somewhat cloudy. Aromas of orange and honey were evident, and after several minutes, I could pick up a slightly floral note, perhaps from the rye itself.  When I inhaled through my mouth, there was a definitive orange peel.

Flavors of orange citrus, orange peel (yes, these are two different flavors) and sweet honey coated my tongue. The finish was long and very, very sweet, with some citric acid left on the tongue. I could not find any "evidence" of whiskey during my trial. I don't mean to imply there is no whiskey in it, rather, there just wasn't any whiskey flavor. However, the sweetness left me grabbing a barrel proof Bourbon to end the sensation. 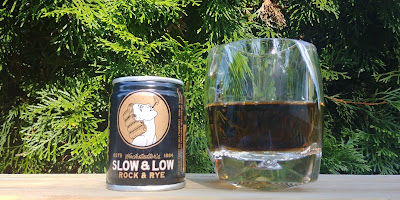 The appearance is a deep, dark amber that was clear.  The aroma of orange citrus was very heavy with a hint of maraschino cherries. There was also a candy quality on the nose.  When I inhaled through my lips, it was all thick honey.

The mouthfeel was light and airy. Flavors of orange bitters hit my palate hard.  Behind that was honey and white sugar.  Candied orange slices left a long, very sweet finish.  There was also mild alcohol burn, but it was not overwhelming. Then, the sweetness turned bitter which rolled on and on.  The best way I could describe the experience is the beginning of an Old Fashioned, but not in a good way.

The Verdict:  Normally I would do a Bottle, Bar or Bust recommendation. I decided to go a different way because, to be perfectly frank, after tasting both the Stolen X and Slow & Low, I enjoyed neither. But, rather than stating these were bad versions of Rock & Rye, I am assuming I just don't care for Rock & Rye in general.

Saying all of that, these are two absolutely different expressions of the classic cocktail.  As a whiskey drinker, the Slow & Low offered me minor evidence of Rye on the palate. And, to be fair, there is a four-point difference in proof between the two. The Slow & Low was also more complex than the Stolen X.

When I drink a cocktail, I want the character of the main ingredient, in this case, whiskey, to shine through. Only one had some whiskey character and as such, the winner became easy:  Slow & Low.

Cheers!
Posted by Whiskeyfellow at 7:02 AM

Whiskeyfellow
I’m a Whisk€y Consultant and Barrel Geek, a Senior Contributor for Bourbon & Banter, a blogger on Instagram, a copywriter for distilleries and producers, and enjoy working with folks in the whisk€y industry. I host workshops and tasting events at distilleries, bars, and liquor stores. If it is whiskey-related, I'm interested, both personally and professionally. Whether you are a craft or legacy distiller, I’m always looking for something new to review. Samples are welcomed with the full understanding that my reviews will always be truthful and unbiased. Please message me for information on how to submit a sample. Cheers!