Being the first with something can be really exciting, especially if things turn out well. Then again, it can be very disappointing if things don't quite turn out as expected. Think of it like virginity. For some, losing it was exciting, for others, not so much.

Now, I know what you're asking yourself... Why on earth would he bring up losing your virginity in a whiskey review? I swear I do have a purpose.

Border Bourbon has been around for several years. If you're not familiar with it, it is distilled in New Richmond, Wisconsin by 45th Parallel Distillery. They aren't new to the game, they've been distilling since 2007, both for themselves and as contract distillers. What they've not done is have anyone do a barrel proof store pick before... until now.  Niemuth's Southside Market in Appleton, WI took the risk and named their pick Like a Virgin, which is Barrel 141. 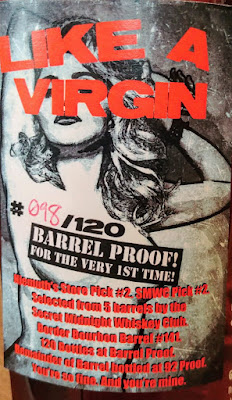 Like A Virgin actually comes in two versions:  The barrel-proof and a 92° from the same barrel.  The former is bottled at 120° and retails for $49.99, while the latter retails for $39.99.  It carries no age statement (I could make a crass joke but will pass), it is pot-stilled from a mash of corn, rye, wheat, and barley.  45th Parallel uses grains sourced from eight miles from its distillery, and ages in medium-char, Ozark white oak barrels.

I am reviewing both versions, and want to thank Niemuth's for providing me samples in exchange for a no-holds-barred, honest review of each.

Appearance:  In my Glencairn, Like a Virgin presented as a deep, dark amber. It left a medium rim on the glass that created fat droplets. And, despite how heavy those droplets appeared, they took over 60 seconds to even start working their way back to the pool of liquid sunshine.

Nose:  Aromas of sweet corn, cinnamon, and vanilla permeated the air. As I continued nosing, I picked up caramel and then, behind that, what I can only classify as raisin bread. That's a new descriptor for me.  When I inhaled through my lips, it was all thick, rich caramel.

Palate:  As I sipped Like a Virgin, the first thought that hit me was, This is 120°? Really? It was very light and airy in my mouth. That was the mouthfeel. The palate? That was a completely different story.

On the front, vanilla abounded. That yielded to a blend of light rye spice and black cherries mid-palate. But, then, on the back, BOOM!  White pepper and coffee hit hard.

Finish:  The finish, or in this case, the climax (I tried not to have any more jokes, but hey, sometimes you have to take the bull by the horns) was very long, with oak and white pepper. It seemed to go on forever, wave after wave.

Appearance:  Despite a significant dilution of 28°, the color of Like a Virgin didn't change much. It was a few shades lighter, but I would still describe it as dark and deep. The rim on my glass was much thinner that left very small legs, but they dropped quickly into the pool.

Nose:  The aromas of sweet corn and vanilla remained, although more muted. While there was no cinnamon, an addition of toasted oak arrived just before the dried fruit. When I inhaled through my lips, it was pure vanilla.

Palate:  As I sipped Like a Virgin, it had a heavier, creamy mouthfeel. That can be fairly common with dilution. The vanilla bomb from the barrel-proof version remained. Mid-palate kept the light rye spice, but instead of black cherry, it was dry oak. And then, almost out of nowhere, black cherry and walnut dominated the back.

Finish:  This climax from Like a Virgin was long with black pepper and oak. The length wasn't nearly as long as the barrel-proof version, but it was enough to make you remember it afterward.

Here's where you get to ask, So, was it good for you?  I find whiskeys that offer me something unusual attractive. In the case of Like a Virgin, that raisin bread was definitely unique. The airiness of the mouthfeel with the barrel-proof version was certainly an attention-getter.  I really enjoyed the barrel-proof version. I enjoyed it a lot. And, for $49.99, that's very affordable. It definitely takes the coveted Bottle rating.

With regard to the 92°, I enjoyed it, but I have to admit I didn't enjoy it as much as the former. I do realize comparing the two might seem unfair, but remember, these are literally the same Bourbon from the same barrel, just at different proofs. While I did enjoy the creamy mouthfeel, I much preferred the nose, palate, and finish of the barrel-proof version. $39.99 is certainly affordable and this is rated as a Bar with the understanding that you can't get it at a bar. You can always ask the folks at Niemuth's if they have a taster available (no promises on that). Cheers!

My Simple, Easy to Understand Rating System
Posted by Whiskeyfellow at 12:15 PM