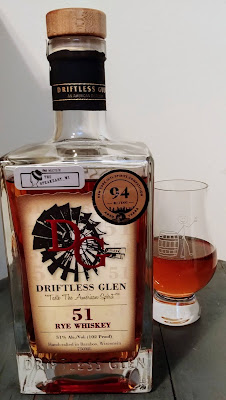 Barrel picks are always a special experience, but sometimes, when you least expect it, you're part of a one-of-a-kind pick. On October 5th, Troy Mancusi, Nathanael Romick of McFarland Liquor, and I were invited to Driftless Glen Distillery in Baraboo, Wisconsin to have an exclusive pick of their 51 Rye Whiskey for The Speakeasy_WI.

Yes, yes I know. Every barrel pick is exclusive and one-of-a-kind. But this is above and beyond that.  You see, this is the only 51 Rye pick in the world. There were only a few barrels total, and the ones we did not choose would be blended together for the rest of the retail universe.

The idea behind 51 Rye was purposeful. It aged four years and five months in 59-gallon barrels and is bottled at 51% ABV (102 proof). It is distilled from a mash of 51% Rye, 33% corn and 16% malted barley. We tried four different barrels at both barrel proof and our best estimate at retail proof. We wound up selecting Barrel 847 and named it Wicked Sensation as we knew it would drop very fast, probably right before Halloween. Retail at McFarland Liquor is $43.99.

There is always a difference in a whiskey when you proof it down compared to how it comes out of the barrel. Even a few proof points can make a significant impact. Two of us were very unimpressed with 847 at barrel proof. It was dead last for me. I disliked it so much that I drew a line through my notes. But, once we proofed it down, something spooky happened. It got very, very good.

In my Glencairn glass, Wicked Sensation presented as a dull, deep-orange amber. A ghostly rim was barely visible, and it was almost as if the legs were an apparition as they suddenly appeared and crawled down to the liquid sunshine.

A specter of cinnamon and dried fruit tantalized my nose. The dried fruit transformed to orange peel as I continued to sniff, and beneath that, an almost undetectable aroma of oak intermingled with French vanilla.  When I inhaled through my lips, it was back to dried fruit.

Wicked Sensation had a thick, creamy mouthfeel that coated everywhere. At the front, caramel and mocha grabbed hold. The mocha then became an almost fierce dark chocolate in the middle. The phantom of caramel hung on in the back.

Frankly, you'd not know Wicked Sensation was a Rye until the very long finish of oak and white pepper. It remained thick and creamy on the back of the palate and in my throat. There were no typical floral or spice notes until that spice appeared at the very end.

Bottle, Bar or Bust:  At barrel proof, Wicked Sensation was a one-note wonder of oak on both the palate and the finish. The fact that it transformed into something incredible once proofed down was almost scary. While I've smattered these notes with little spiritual references for Halloween, they're all accurate descriptors of what I experienced.  As a final reminder, I don't pick anything that isn't special and delicious - I walk away from ones that don't meet my standards. As such, Wicked Sensation is a Bottle, especially for the price.

Finally, the Speakeasy_WI picks have been selling out in just a few days. Our last one, Turkey Drop, sold out in just 48 hours. If you're considering picking up a bottle of Wicked Sensation, the time to act is now before it is too late. Cheers! 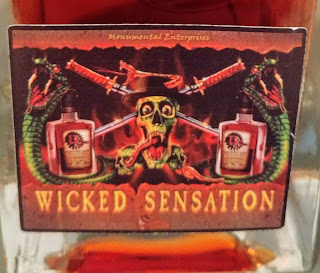 Posted by Whiskeyfellow at 4:00 PM