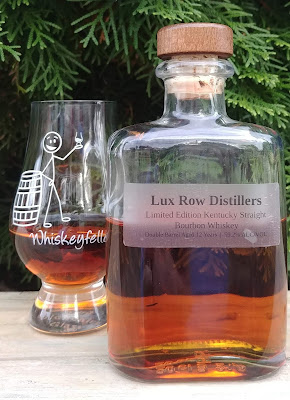 The world is full of expensive whiskeys and, for the most part, I'm a pretty price-conscious shopper. Whiskey appreciation can very easily become a rich man's (or woman's) game and that does not describe me very well. So, when a $150 new Bourbon comes on the scene, my gut reaction is to question its value. There is always the #DrinkCurious factor with no matter what I'm trying and Is it worth it? is always part of the equation.

Enter Lux Row Distillers Limited Edition Double Barrel Bourbon into the mix. This is a 12-year Kentucky-only whiskey that weighs in at a purposeful 118.4°.  Obviously, this isn't Lux Row's own distillate, they've not been distilling that long. Based upon prior Lux Row/Luxco releases, chances are this comes out of Heaven Hill.

The kneejerk question becomes, isn't this just some version of Elijah Craig Barrel Proof and, if so, why would I pay nearly twice the price for it?  Excellent question. Let's examine this further.

I'm a bit of an Elijah Craig junkie. Of everything in my whiskey library, there are more editions of Elijah Craig than anything else. It may be Heaven Hill's distillate, but this is certainly not Elijah Craig. This was, however, aged in two different barrels for a dozen years before being married. This is also not barrel proof. According to Head Distiller and Master Blender John Rempe, "Even the proof, 118.4°, commemorates the distillery's grand opening of April 2018." It was distilled from a mash of corn, rye, and barley and yielded about 6,000 bottles.

I'd like to thank Lux Row Distillers for providing me a sample bottle in exchange for a no-holds-barred, honest review. And, that being said, let's get on with it.

When I first unpacked it, there was an Oooh, Ahhh moment. Even Mrs. Whiskeyfellow said, "Look at that color!" In my Glencairn glass, this Bourbon presented itself as a deep, dark, reddish amber.   It left a thin rim and thick, wavy legs that raced back to the pool of liquid sunshine.

Aromas of vanilla and caramel thwapped my nostrils, which was quickly followed by cherry and cinnamon. When I inhaled through my lips, it was a thick bouquet of dried fruit.

The mouthfeel was very light and the front offered vanilla with a hint of orange peel on the palate. Mid-palate, it was a blend of toasted oak and mace. On the back was a serious rye spice that morphed to clove. It culminated in a long, spicy, black pepper finish. I had expected the clove to keep going but it was subdued by the pepper.

Just for kicks, I added two drops of distilled water to the glass. The nose transformed into a massive caramel bomb mixed with heavy stone fruit. The mouthfeel, as expected, became creamier. Caramel and pumpkin pie coated my tongue before cherry and light rye usurped it.  The finish was much shorter, and it was heavy on pumpkin pie. That's how much the mace was affected. It became a liquid dessert.

Bottle, Bar or Bust:  I'm back to the $150 price tag on this. I found this Bourbon to be very well balanced when sipped neat, and there was a bit of a Wow! factor with adding the two drops of water. They became very different whiskeys, and I enjoyed both immensely, leaning slightly to the neat version, but I would have gladly sipped it either way with a smile. It takes a lot for me to give a Bottle rating to such a pricey whiskey, but dagnabit, Lux Row knocked this one out of the park.  Cheers!

Posted by Whiskeyfellow at 9:30 AM