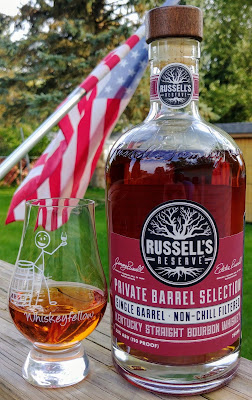 I hate to admit this because it gives an aura of bias, but I've not been the biggest cheerleader for Wild Turkey. I have a ton of respect for Eddie and Jimmy Russell, but I've never felt the need to chase down various releases. When approached with an opportunity to do a Russell's Reserve barrel pick for The Speakeasy_WI and Monumental Enterprises, I was determined to keep an open mind. It had been a while since I had my last Wild Turkey pour and, after all, there's the whole #DrinkCurious thing to deal with. Lord knows I've come back to previously overlooked whiskeys and found out I really did like them after all.

When we selected our tasting panel, we invited Jon Watson, a Speakeasy member who is one of the biggest fans of Wild Turkey who I've run across, to be the Special Guest Picker. This was a big asset because he seemed to know everything inside and out about Wild Turkey.

Jon explained to us that Camp Nelson is where the premiere barrels are aged. This Bourbon was distilled from a mash of 75% corn, 13% rye, and 12% malted barley on December 22, 2009, and rested in #4 charred barrels until July 2nd, 2019. We selected Barrel 0125 from Warehouse A on the 4th Floor. It is non-chill filtered and because it is Russell's Reserve, it is bottled at 110°.  We named this pick WI Whiskey Sipper because that's the name of Jon's Instagram account. WI Whiskey Sipper is available exclusively at McFarland Liquors and retails for $52.99.

In my Glencairn glass, this Bourbon presented as a bright amber with a thicker rim that gave way to fat slow legs.  Aromas of caramel and berry fruit were thick on the nose, and underneath those were oak and a light mintiness.  When I inhaled through my lips, there was a strong vanilla with a bit of orange peel that rolled across my palate.

The mouthfeel was very thin. At the front, it was an obvious vanilla and caramel. Once I got past those flavors, it offered a pleasant orange mid-palate. On the back, it was a combination of dry oak and mint. All of this completed in a medium-length finish of pepper and rye spice. 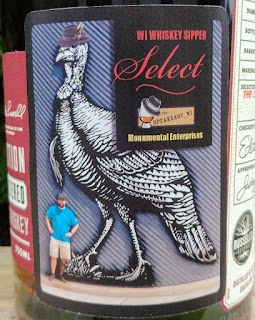 Bottle, Bar or Bust:  When I'm involved in barrel picks, I'm always prepared to reject all the samples and go home empty-handed.  I'm very selective of any whiskey that I am attaching my reputation on. I went into this pick not appreciating Wild Turkey and I came out with newfound respect. As such, the obvious ranking is a Bottle.

There are a few things that I'd like to say before I close. First and foremost, we've been blessed that Speakeasy picks have become very popular, and the last several have sold out in just a few days.

Secondly, I've pushed out this review after being informed that, in only 24 hours, half the 144 bottles have already been sold. This means there is no time to dilly-dally.

Finally, I've subsequently been involved with other Russell's Reserve picks and am heading to Kentucky to do another in a few weeks. Apparently, it tuns out I'm a fan.  Cheers!
Posted by Whiskeyfellow at 5:31 PM