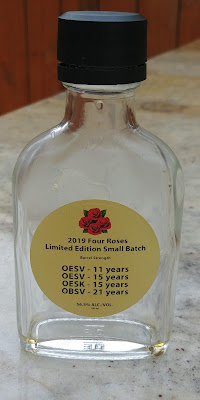 Before I get started, I know what you're thinking after looking at this review's photo:  Hey, Whiskeyfellow, that's an empty bottle! And, you'd be absolutely correct. What you see there is a media sample of the 2019 Four Roses Limited Edition Small Batch bottle that was passed around to a handful of other reviewers and I got the last pour.

If you've never heard of the Four Roses Limited Edition Small Batch before (many folks simply refer to it as SmBLE), it is an annual release from, you guessed it, Four Roses. It is also one of the most coveted American whiskey releases, along with the Van Winkle and Buffalo Trace Antique Collection (BTAC) lines, that people chase down as soon as they're available.

Four Roses distills ten different recipes of their Bourbon. They are always coded as O__S__.  The O and S never change.  The blanks do. The first blank is always either a B or an E. The B refers to their high-rye (35%) mashbill and the E refers to the low (20%) mashbill.

The second blank refers to their proprietary yeast strains, which are F, K, O, Q, and V.  F is supposed to have herbal notes, K will have slight spice, O will have rich fruit, Q will have a floral essence, and V will have delicate fruit.  If all that sounds confusing, it is, and the reason I say that is I've tasted these recipes and sometimes the guide and what you're actually tasting don't match!  But, like anything else, these are a guide.

The 2019 SmBLE is a barrel proof combination of an 11-year OESV, a 15-year OESV, a 15-year OESK, and a 21-year OBSV.  On an interesting side note, this is the first time Four Roses has included a 21-year Bourbon in the blend. It winds up hitting the bottle at 112.6° and the suggested retail price is $140.00, but in all honesty, that number is meaningless because the chances of you finding it at retail for retail are exceedingly slim (sorry, don't shoot me, I'm just the messenger).  The secondary market (call it black or gray) probably has this one closer to $500.00.

I've also been blessed with the fact that I've at least sampled (if not owned) every release since 2012. I mention that because it is important for you to know because I can relate to this year's bang for the buck compared to previous releases.

And, with that being said, let's get on with the tasting notes...

In my Glencairn glass, the 2019 SmBLE presents as a deep, caramel color.  It left a very thin rim and legs which raced back to the pool of Bourbon.

I was taken back by how mellow the nose was - there was no wallop of alcohol fumes. Of course, that might have been due to my getting the last of the sample bottle.  But, it made for picking up aromas rather easy.  First up was sweet orchard fruits of peach and apricot.  Then came the oak, followed by vanilla and baking spices. When I inhaled through my lips, it was thick vanilla.

The mouthfeel was thick and creamy and I had no problems coating my entire palate. At the front, I enjoyed salted caramel and what I would swear to be whipped cream. Mid-palate, it morphed to candied fruits and honey. At the back, a surprisingly mild oak considering how old the component Bourbons are.

A medium finish greeted me with clove, white pepper, and cinnamon which, when it fell off, yielded sweet fruit and oak.

Bottle, Bar or Bust:  I really, really enjoyed the 2019 SmBLE and wish I could score my own bottle. Would I pay retail given the opportunity?  In a heartbeat.  This was a fantastic pour and absolutely worthy of the Four Roses annual release. There were a ton of good things going on from the nosing to the finish.

As far as secondary market pricing, that one is up to you.  I'm not a fan of it and don't participate. The risk of getting a counterfeit bottle is too high for me and so is the risk of getting stiffed if you're in a faceless transaction. Moreover, it isn't legal and if you wind up in either of these situations, you can't exactly call law enforcement to assist. Cheers!
Posted by Whiskeyfellow at 6:47 AM