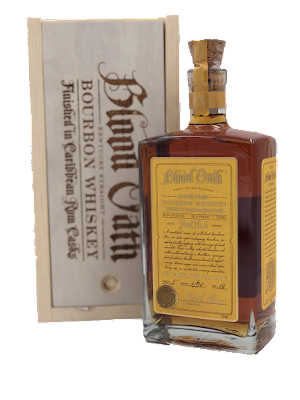 I've really enjoyed what Lux Row Distillers has produced lately. Their distillery-only Double Barrel Bourbon is one of the top whiskeys I've tried this year. Their sister distillery, Limestone Branch, has also done a great job overall.  While both sisters are working distilleries, most of what's out there is still sourced.

Last year, on Bourbon & Banter, I reviewed Blood Oath Pact 4. My recommendation was to try it at a Bar. As such, when Luxco sent me a bottle of Blood Oath Pact 5 for a no-strings-attached, honest review, my curiosity was piqued. Would it be better than Pact 4? I'd soon have the opportunity to find out. I'd like to take an opportunity to thank Luxco for this opportunity.

One of the consistent qualities of the Blood Oath line is proof:  98.6°.  Why?  Because that's the average human body temperature and its blood inside. Pact 5 is a blend of 13-year high-rye Bourbon, an 11-year wheated Bourbon, and an 8-year Rye.  Then, the concoction was finished in Caribbean dark rum barrels. Retail is $99.99, and while we don't know who the actual distiller is, it is an educated guess that it is Heaven Hill.

In my Glencairn, Pact 5 presented as a medium amber with a very definite orange hue. The rim was thin and the legs were among the fastest I've seen as it raced back to the pool of liquid sunshine.

There was a complicated mixture of vanilla and raisin on my initial sniff. Beneath that was brown sugar and light citrus.  Just as I was getting ready to move to what aromas would greet my mouth, I picked up wet oak.  When I inhaled through my lips, it was thick molasses that coated my palate.

The mouthfeel was almost like molasses.  I picked up black pepper first, which was followed by oak and honey. On the back, it was a lovely mix of caramel and chocolate. The finish was long, with black pepper, wet oak, and caramel. And, as I was quite impressed, that long finish became bitter, just like I had placed bitters on my tongue.

Bottle, Bar or Bust:  I really, really enjoyed Pact 5 until the finish finished. I did polish through the sample bottle, and the more I sipped it the more I enjoyed it - again, until the finish, which became a turn-off. With that, combined with the $99.99 price, I'm going to recommend trying this one at a Bar and taste if that finish is a deal-breaker for you or not.  Cheers!

Posted by Whiskeyfellow at 7:45 AM