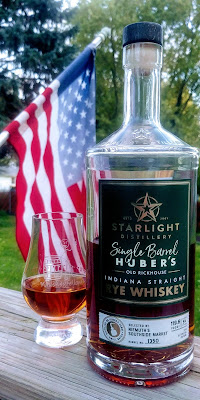 Two weeks ago I had an opportunity to visit Starlight Distillery, which is located in Borden, Indiana. I know what you're thinking, if it is Indiana it must be MGP, right?

Flashback to about six weeks ago, I was introduced to Starlight Distillery via Niemuth's Southside Market, which had a barrel pick of Huber's Old Rickhouse Indiana Straight Rye. My first question was what I asked above. As it turns out, no, Starlight has nothing at all to do with MGP aside from the fact they're housed in the same state.  Starlight is housed on the Huber's Winery campus, a winery that has been family owned since 1843, is in its seventh generation, and they've been distilling since 2001 when they started off with brandy, and now distill gin, rum, whiskey, grappa, and vodka.

Today I'm reviewing Barrel #1350, selected by the Secret Midnight Whiskey Club and lovingly called Tasty Tuff. This barrel was distilled from a mash of 85% rye and 15% malted barley, then aged 5-1/2 years old before being dumped at 119.6°.  It yielded 210 bottles and retails for $54.99. I'd like to thank Niemuth's for providing me a sample in exchange for a no-holds-barred, honest review.

Appearance:  In my Glencairn glass, Tasty Tuff appears as an enticing orange amber. It left a thin rim on the wall that led to fat droplets that crawled back to the pool of liquid sunshine.

Nose:  Aromas of plum and cherry greeted my nostrils. Beneath that stone fruits were mint and prevalent oak.  When I inhaled through my lips, it was a combination of the plum and mint, creating an interesting flavor.

Palate:  The first sip offered a thin and coating mouthfeel.  The plum and cherry made themselves known at the front. Mid-palate changed those up to cinnamon and rye spice, finally yielding to cocoa and oak on the back. If this sounds like a dessert whiskey, it isn't but the dessert flavors are there nonetheless.
Finish:  The finish was a massive blast of dark chocolate complimented with a long, spicy clove.

I opted to try Tasty Tuff with two drops of distilled water to discover what might change. The nose was definitely sweeter with more fruit, this time closer to berries and cocoa. When I inhaled through my lips I got the same plum, but it was now married with vanilla.

The mouthfeel was still thin and coating.  On the palate, the chocolate that was on the finish was way up on the front. The cinnamon remained at mid-palate and was joined by oak, with the rye spice on the back. The finish itself was unaltered with that dark chocolate and clove.

Bottle, Bar or Bust:  I've been a fan of Niemuth's ability to pick barrels and I'll be frank:  Tasty Tuff is no exception to the rule. There were so many good things going on with this Rye and "tasty" doesn't provide an accurate descriptor. When you consider this is bottled at barrel proof, the $54.99 outlay is an easy Bottle recommendation. Cheers!
My Simple, Easy to Understand Rating System
Posted by Whiskeyfellow at 6:51 AM