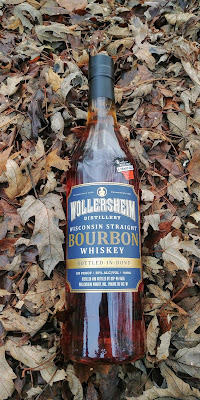 In Wisconsin, post-Prohibition Bottled-in-Bond is a very new thing. Unlike the law itself, dating back to 1897, my home state is a little late to the game. My favorite category is Bottled-in-Bond, so this naturally brings a smile to my face and piqued my interest.

On November 16th, Wollersheim Distillery released the second Bottled-in-Bond whiskey in the state since Prohibition. I was there, in line, in the cold, waiting for a chance to buy a bottle. I had tasted this several weeks before the release, but it was straight from the barrel and not proofed down. I enjoyed the straight-from-the-barrel taste I had and was excited about what might wind up in the bottle.

A small, but necessary segway if I may.  There are older Bourbons and there are younger Bourbons.  The same thing goes with American Rye.  Younger Bourbons and Ryes tend to have a much different profile than older siblings. As such, I consider each a unique category and don't compare younger to older unless there is a valid reason to do so.

Wollersheim's Bottled-in-Bond is their first-ever Bourbon release. It is aged four years and, as Bottled-in-Bond legalities require, it is bottled at 100°. I would consider it a younger Bourbon. Wollersheim used five different barrels in the initial blend. The mash is 75% white corn, 15% malted barley, and 10% rye, with the corn and rye grown about a mile from the distillery.  The barley is from Wisconsin, and the barrel staves are Wisconsin-grown and seasoned on site. Retail ranges between $50.00 and $65.00.

Wollersheim even mimicked a Wisconsin tax stamp to show the age of the Bourbon. 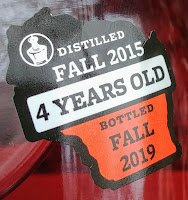 Packaging is nifty but can at times be deceiving. We all know there are some gorgeous bottles out there that are worth more than the whiskey inside. Does Wollersheim's first Bourbon fall into that category? The only way to find out is to #DrinkCurious, so here we go.

In my Glencairn glass, this Bourbon presents as an orange amber. It left a very thin rim on my glass that created no legs whatsoever. It was just a curtain of whiskey that dropped back down into the pool of liquid sunshine. Sometimes that happens with glasses that have an interior hydrophobic coating. I used a glass that I have used many times and am positive does not, so that was a bit of a shocker.

Despite the low rye content, my initial nosing was on the spicy side. First, it was oak. Behind that came cinnamon. Subsequent sniffs unveiled caramel and sweet corn. When I inhaled through my lips, it was corn, but more like standing in a cornfield rather than simply shucked corn. There was something earthy about it.

An oily, coating mouthfeel greeted my palate. At the front, it was corn and dark chocolate. Mid-palate, it became caramel and cocoa. On the back, it was a mixture of tobacco leaf, coffee, and vanilla. Moreover, the mouthfeel went from oily to creamy.

The finish was downright strange. It started off as oak. Then, it slid into caramel. From there, it altered to coffee.  But, these weren't individual change-ups. Rather, the finish notes would melt from one to the other. And, while all that diffusing occurred, my hard palate was sizzling with black pepper.

Bottle, Bar or Bust:  Mid-point on craft whiskeys is about $50.00. A few bucks either direction doesn't shock me anymore.  If you've read my reviews for any length of time, you know that I'm a fan of the strange and unusual so long as it is pleasant. Well, Wollersheim fits that. This is absolutely a younger Bourbon that has a lot of interesting things going for it. While I did enjoy this more at barrel proof, I'm happy with my purchase and believe you'll find this worth adding to your whiskey library.


The second bottling of this Bourbon will be in June of 2020 if you are unable to find the initial release. Cheers!
Posted by Whiskeyfellow at 7:30 AM