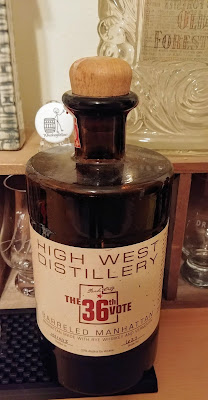 December 5th is just an ordinary day unless freedom is meaningful to you, in which case it is a landmark day. You see, today is Repeal Day, the day in 1933 that Utah cast the 36th vote at 5:32pm (Eastern) to pass the 21st Amendment. The 21st repealed the 18th Amendment and ended that horrific experiment called Prohibition.

For several years, I've been sipping on High West Distillery's The 36th Vote to celebrate Repeal Day. It really is the only time I ever get into the bottle. The 36th Vote is a barreled Manhattan, and while I'm generally not a fan of pre-mixed cocktails, High West does a good job with theirs.

What will be in your glass to celebrate the passage of the 21st Amendment?

Posted by Whiskeyfellow at 6:55 AM