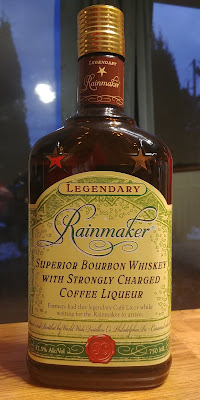 My experience with flavored whiskeys tends to be negative. That isn't to say I've not had some tasty flavored whiskeys, rather, they're just hard to come by. Usually, they are overly flavored, often not even doing a good job with that, and then can be sickly sweet. I find the producers are trying to hide a bad whiskey under all of that flavoring. So, when a friend came over and poured me "Legendary" Rainmaker Superior Bourbon Whiskey with Strongly Charged Coffee Liqueur, you can understand that I came at it very skeptical.  But, then there's that whole #DrinkCurious lifestyle thing.

There isn't any information online that I could find about Rainmaker. I do know that it is produced by World Wide Distillers Company out of Philadelphia. When I visited the company website, they mention several sourced items but, curiously, not Rainmaker.  What I do know is what I could get from the label. It is 37.5% ABV (75°), it has added caramel coloring, and the back label simply tells you what a rainmaker is while providing four recipes.  That's not very encouraging for something that is supposed to be "superior bourbon whiskey." I can also tell you that Rainmaker retails for about $23.99.

So, without any background, without knowing anything about the company or the whiskey they have sourced (because it says produced on the bottle, not distilled), I can only give my tasting notes and recommendation. Without further ado, here we go...

In my glass, Rainmaker presents as deep and dark.  Of course, with the artificial coloring, that really means nothing except that it looks good in a glass. It did leave an ultra-thin rim that created super-fast legs on the wall of my Glencairn.

The nose was a very enticing mix of coffee ice cream and coconut. While I'm not a coffee drinker, I do appreciate the flavor in other things, and I'm a big fan of coffee ice cream, Kahlua, White Russians, etc. And, the coconut gave it an additional level of interest.  When I inhaled through my lips, it was absolutely pure coffee.

Rainmaker had a very thick mouthfeel, again, reminding me of the aforementioned Kahlua. The palate was a combination of espresso and rich caramel and offered a finish of chocolate-covered cherries that was, thankfully, not short-lasting.

As much as I tried, I didn't pick up any whiskey notes.  Again, it makes it difficult to tell you whose Bourbon this might have been, but if they used a superior Bourbon, it was completely wasted. My guess is that it was much less than superior, only because it would have been stupid to do otherwise.

Bottle, Bar or Bust:  Here's the weird thing. This stuff is absolutely delicious. I could drink this neat all day.  It would probably be excellent as the base of a White Russian. Yes, that's right, you're reading me giving a flavored whiskey liqueur that coveted Bottle rating. Finally, if you can find any background on this, please let me know. Cheers!
Posted by Whiskeyfellow at 6:38 AM