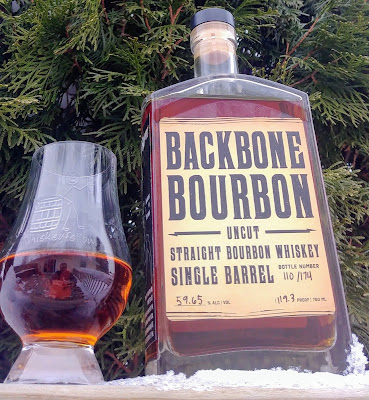 I can remember, not even a few years ago, when everyone was sneering at MGP and calling it junk. Fast forward a bit, and magically here we are with MGP being all the rage.

If you're unfamiliar with MGP, it is the old Seagram's Distillery in Lawrenceburg, Indiana. It has its own house brands, but for the most part, they're the major source of whiskeys for new craft brands. Sometimes, these craft brands are waiting for their own distillate to mature. Others are just sourcing barrels and hoping the supply doesn't dry up.

Today I'm reviewing Backbone Bourbon, which is a brand that sources from MGP.  This is a single barrel release, and it is nicknamed Unicorn Slayer by Niemuth's Southside Market in Appleton, Wisconsin. As I demand transparency from producers and distillers, I hold myself to the same standard. So, in full disclosure, I assisted the Secret Midnight Whiskey Club in picking this barrel. 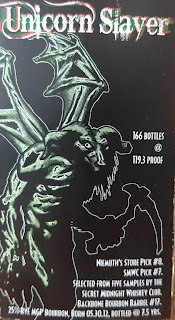 Appearance:  In my Glencairn glass, Unicorn Slayer was a deep and dark amber. It created a micro-rim on the wall that led to a thick, wavy curtain to drop into the pool of liquid sunshine. That left behind fat, heavy legs that stuck to the side of the glass.

Palate:  The mouth was thin and oily and coated everywhere. Amazingly, there was very little heat.  Berry, vanilla, and cinnamon greeted the front of my palate. As it worked its way back, I picked up a definitive dry oak, white pepper, and caramel. Then, on the back of my palate, it was all rye spice and clove.

Finish:  All of this enveloped into a very long, warm finish. If you would have told me this was almost 120° and I didn't know any better, I would have challenged you on the claim. Clove and rye spice remained for much of the finish, but as it began to die off, creamy caramel closed everything up in a nice, neat package.

Bottle, Bar, or Bust:  I have a very strict standard when I pick barrels. It has to be something special, and I don't attach my name to anything that is a me-too whiskey. One of the things that really grabbed me was how easy it was to drink. There was nothing harsh about this barrel and, quite frankly, the proof will sneak up on you if you're not careful. The nose was very complex, and the palate offered a wide range of flavors. This is a combination that I find very attractive and it is available at a very fair price.


I'll go one step further. I have picked a lot of barrels. Unicorn Slayer is easily in the Top 5 of what I've picked. Obviously, this one is a Bottle rating. Cheers!
My Simple, Easy to Understand Rating System

Posted by Whiskeyfellow at 9:25 AM