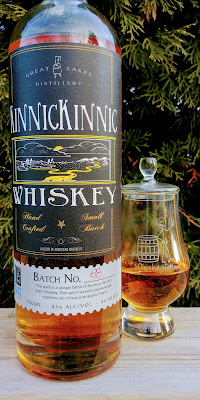 Happy 2020!  I'm starting the new year with a Wisconsin-based selection: KinnicKinnic Whiskey. If you know anything about Wisconsin, you know we love to name things that honor Native American culture and, just for kicks, happen to be difficult to pronounce. KinnicKinnic, pronounced Kin-I-Kuh-Nic, is an Ojibwe word that means what is mixed.

Great Lakes uses its own distillate for the Rye and Malt contents of KinnicKinnic. The Malt portion is aged in used cooperage. The Bourbon is sourced from an undisclosed distillery. These whiskeys are blended in small batches and non-chill filtered. KinnicKinnic carries no age statement, is bottled at 86°, retails for around $35.00, and is distributed in several states as well as online retailers.  I'm reviewing Batch 88.

I'd like to thank Great Lakes Distillery for providing me a sample of KinnicKinnic in exchange for a no-strings-attached, honest review. And now, let's get to it.

In my Glencairn glass, this whiskey appears as light amber and the clarity is a bit fuzzy, probably due to the proof and lack of chill filtering. It left a thick rim that generated fat, heavy, slow legs to drop back to the pool of liquid sunshine.

Aromas of oak and malted barley were obvious, and then things became challenging to separate. Underneath those, I picked up an earthiness, cocoa, honey, char and finally, dark fruits such as plum and cherry. When I inhaled through my lips, a heft of chocolate raced over my palate.

Sipping KinnicKinnic provided a thin mouthfeel that completely coated my mouth. Milk chocolate, cocoa, cinnamon, and brown sugar started at the front. Then, at mid-palate, rye spice, tobacco leaf, sweet dark fruits, and toffee took over. On the back, it was far less complicated with oak and black pepper.

A very long, hearty finish started off with char and smoke morphed into sweet with black pepper.

Bottle, Bar or Bust:  Overall, KinnicKinnic was a very complex and interesting whiskey. It took me several attempts to figure it out and nail down aromas and flavors. I found it a fun challenge. Blended whiskeys lacking neutral grain content are not unheard of, but of the ones I've tried, none were as captivating as KinnicKinnic. When I factor in the price, this one is an easy Bottle that I'm happy to have in my library.


On a final note, I would be really curious to try this at a higher proof. Cheers!
Posted by Whiskeyfellow at 9:22 AM