My Not So Aimless Wander Around Kentucky

I've been to Kentucky several times. To me, it is the Promised Land. The distilleries, the great people, the Bourbon culture, the gorgeous scenery - it all gets my blood racing. This time around, the purpose was for a Bourbon & Banter barrel pick and some handshaking, and Mrs. Whiskeyfellow and I decided to make it an extended trip. 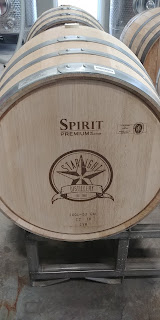 Our first stop was on the way to Kentucky, in Borden, Indiana.  If you're wondering what's in Borden, it is the home to Huber Winery and Orchard and Starlight Distillery.


When I was taking part in some barrel picks recently, I was introduced to Starlight via Huber's Old Rickhouse Indiana Straight Rye. Now, I know what you're thinking... Indiana Straight Rye means that this is MGP distillate. I made that same assumption and I was absolutely wrong. Huber's has been around for 170 some-odd years. The distillery is newer, but it is all their own.

Anyway, for $15.00, you get a tour of either the winery or the distillery. Either one includes seven samples. As luck would have it, they had several whiskeys from which to sample, and the only one they were sold out of was the Old Rickhouse.  That's okay because I had a chance to sample their other whiskeys, as well as a Blueberry Port and a Bottled in Bond Apple Brandy.  Reviews of the whiskeys will follow.


I will say this much:  Starlight is a distillery you should pay attention to. I predict big things once people learn about it.

Our next stop was to Louisville Distilling Company, a/k/a Angel's Envy. This working distillery was opened in an ex-elevator and sawblade factory. For $18, they put on a very nice tour that gives you a lot of ins-and-outs and provided some good transparency. What you don't get is a glass to keep at the end of the tour. We had a fantastic guide named Peter who knew his stuff and had a great sense of humor. Honestly, a lot of these tours give you the same basic information on the distilling process. Each has some unique aspect of what makes them special. But, the tour guide makes or breaks these tours, and if you get Peter, you're going to have a very enjoyable one.

We sampled their standard Bourbon finished in Port barrels. Once the tour ends, you're invited to their bar where you can order cocktails or their Rye finished in rum casks.

The gift shop was gorgeous, but things were more on the pricey end of the spectrum.

Then, it was off to Old Forester.  This is a working distillery re-opened original location on Whiskey Row. What makes Old Forester unique is they have a working mini cooperage on-premises. I've been to cooperages before and building a barrel is a fascinating process. Being Sunday, the staff was off, but the equipment was still there. Our tour guide was McKenzie who was full of energy and animated. She made it fun. At one point, after she was done explaining where the various flavors come from, my buddy Jim Knudson and I asked her, "Where does the marzipan come from?" Kudos to McKenzie for not missing a beat and getting halfway through her explanation before she stopped and asked, "Is this some sort of set-up?" We admitted it was and had a great laugh.

We sampled the workhorse, Old Forester 86, then 1897 Bottled in Bond, and then their brand-new release of their Rye. For $14 it is a nice tour that, again, does not include a tasting glass to keep at the end. The gift shop has very fair pricing.

Monday morning was the crown jewel.  We met up with Eddie Russell at Wild Turkey to do our barrel pick of Russell's Reserve.  If you're curious, Eddie is very down-to-earth and an all-around gem. We didn't tour the facility, but we did hang out in one of the rickhouses to sample directly from the barrels. We settled on an absolutely delicious one, but until it is time for release, I'll withhold details.

Next was probably the most unusual tour I've ever been on. We were able to tour the Castle & Key distillery on a private tour. Our guide was Abigail, and she knew everything about everything. What made Castle & Key fascinating was how they're still renovating things on the campus. This distillery used to be the Old Taylor Distillery and was left abandoned and severely neglected. They've done a marvelous job restoring things to their original condition as much as possible while ensuring things are safe and up to code. When they're finished, I predict Castle & Key will be like Woodford Reserve or Maker's Mark, where the campus itself will be a destination beyond the distillery.


Castle & Key is not sourcing anything. Currently, they've got vodka and a couple of gins, but we were able to sample some of the newmake that is aging in one of the original rickhouses.  They've also got a gift shop that is well-stocked with variety and was surprisingly affordable.

From there, we went to Michter's Fort Nelson for a private tour. Our guide was Jacqueline, who had an amazing sense of humor and put up with a lot of our silly jokes, including the marzipan one (and then joined in on the fun). We wound up skipping some of the basics since she knew we were not distillery newbies, and really enjoyed the tasting, which included the Michter's 10 Bourbon and Rye as well as the 20 Bourbon. For the record, the 20 is stupidly amazing.


Michter's also has a very interesting bar at the end of the tour. Here, you can try pretty much anything Michter's has ever produced, including the famed Celebration. You may need to take out a small loan for that, though. Their gift shop is very nice and what I browsed seemed affordable.

The next day was our two final distillery tours, starting with Lux Row Distillers. One of the burning questions I've had was Lux Row's relationship with Limestone Branch. I discovered that these are sister organizations under the Luxco parent company.  Thank you to our host, Vincent.


Lux Row is another one of those drop-dead gorgeous campuses. This was erected on a farm near Bardstown and the scenery is amazing. Too bad I didn't catch much of it on film. We were able to sample Rebel Yell, Ezra Brooks 90, and David Nicholson Reserve. We were then given the choice of their Double-Barrel Bourbon and Blood Oath V for our final. I recently reviewed the Double-Barrel Bourbon and fell in love with it, but have a bottle at home and opted for the Blood Oath.


Lux Row also has a beautiful and affordable gift shop.

The final distillery tour was at Bardstown Bourbon Company.  This distillery landed on the Kentucky scene with one plan and wound up with something completely different. They set out to do their own distillate and took on some clients for contract distilling. From there, the contract distilling business apparently went gangbusters. Every client has their own completely customized mashbill and is then distilled by BBC. I don't recall the exact number, but our guide, Sam, told us it was somewhere around 43 different mashbills they distill.

The campus itself is very modern, from the distillery to the guest center to the rickhouses. One curiosity for me was the feasibility of the rickhouse design. The inside was fine, it was the outside. Rickhouses grow a lot of lovely mold on the outside as the angels take their share, but the way the BBC ones were designed with glass walls and wood plank siding, looks like they'd need to be regularly cleaned to maintain the appearance of the campus. Of course, I could be way off base here.


When you come through the front door of BBC, the lobby is their restaurant which, if you're curious, has a very nice menu and the food is well-prepared. Their bar has much more than what you'd find at bars of other distilleries. It is fully stocked with a variety of brands. Their gift shop was minimalistic and could best be described as "new retro-modern" in design. They sold not only their house brand of whiskeys but also those of their clients.


On a side note, in the photo below (the overview of them loading barrels), this guy in the warehouse was very talented. He would spin and flip the barrels to get them in the right place. Spinning and rolling I could understand. Flipping? That looked like it required a lot of practice!

And with that, my time with my fellow Bourbon & Banter colleagues came to a finale. 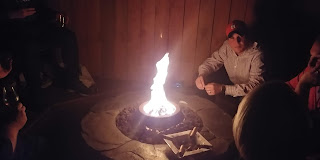 This was, overall, a really fun experience. As I stated at the start, I've been to Kentucky several times. But, it had been five years since I'd been, and there has been a lot of growth in Bourbon Country. Aside from the wonderful fellowship with my colleagues (and seeing many of them in person for the first time), except for Wild Turkey, these were all distilleries that were new to me.


If you've never been to Kentucky, you should go. And, if it has been several years since you last visited, maybe it is time to consider a return.  As for me, I will not wait another five years. 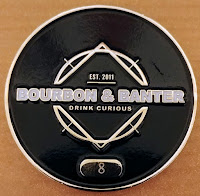 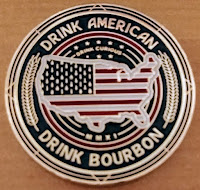 Posted by Whiskeyfellow at 6:47 AM