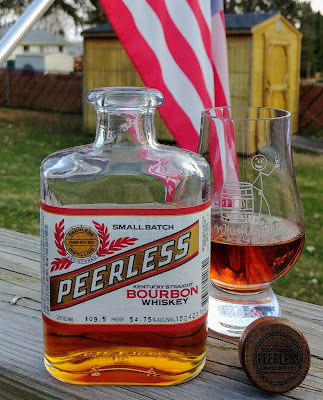 Peerless is an interesting distillery. It tries to do things differently with a goal to break the mold of what you'd expect in a whiskey. They're mostly transparent and want you to know why it is unique.

I've been a fan of Peerless Rye, although I have to admit their pricepoint is hard on the wallet. Unfortunately (or fortunately), I've found Peerless Rye marked down in stores, making it more in line with what is more an attractive price than suggested retail. I've had the two- and three-year versions, the three was a big step up from the two. From this point forward, everything coming out of DSP-KY-50 is four years or older.

A few things that make Peerless unique include a low entry proof of 107° and using a sweet mash. Sweet mash isn't unique but it is less common. Most distilleries use a sour mash where they keep adding old yeast to the next batch, similarly to how you'd create sourdough bread. On the other hand, a sweet mash is using a new, fresh yeast each and every time.

Today I'm pouring Peerless Bourbon, which does not carry an age statement but, as indicated above, is at least four years old. It is distilled from an undisclosed sweet mash of corn, rye, and malted barley, is non-chill filtered, then aged in #3 charred oak barrels from Kelvin Cooperage, and, once dumped, bottled at barrel proof of 109.5°. The suggested retail price is $69.99.

I'd like to thank Peerless for providing me a sample of its Bourbon in exchange for a no-strings-attached, honest review.

In my Glencairn glass, Peerless Bourbon appeared as a deep, orange-amber. It wasn't cloudy, but I couldn't call it clear, either. A thin rim was left on the wall and generated tiny droplets that never really went anywhere, despite my waiting... and waiting. They just stuck to the side of the glass. Eventually, I became more interested in tasting this than waiting for something to happen.

Aromas of sweet corn and maple syrup were evident from the start. Beneath that, I picked up English toffee, almost like a Heath bar. As I continued to use my sniffer, mace came through. I then inhaled through my lips and picked up a lemony-custard.

On my first sip, Peerless Bourbon was like sipping water. It wasn't flavorless, rather, it was the texture. The more I sipped, the more viscous it became until it finally became creamy.  The first flavors to hit my palate was dry wood and caramel. Then, while still at the front, a quick burst of berry appeared almost as quickly as it left. As the Bourbon moved to the middle, the oak mellowed as it married to smoke and dark chocolate.  Tobacco leaf and heavy leather blended together on the back.

A somewhat long finish of dark chocolate, black pepper, dry oak, and caramel warmed the throat. Just like the in-and-out of berry on the palate, this time it was a ghost of citrus that ended it all.

Bottle, Bar or Bust:  Peerless Bourbon is definitely unique. In fact, I described it as meaty to Mrs. Whiskeyfellow, which is not something I thought I'd ever attribute to a whiskey, as that's a term used for red wine. But, it is an accurate descriptor. I enjoyed this Bourbon, it hits my "good-different" button hard, and it is priced right. When you roll all of that together this one's an easy Bottle recommendation. Cheers!
Posted by Whiskeyfellow at 7:15 AM