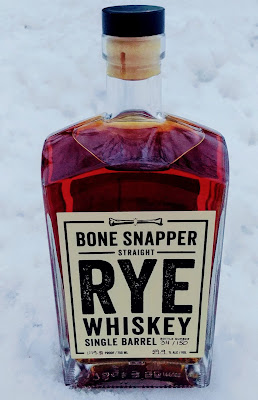 If you search the term, Bone Snapper, you'll find a variety of hits. Some lead to a type of dragon, another to World of Warcraft, and several to Yu-Gi-Oh!  Me?  I have nothing to do with the two latter, and with the former, I'm just not all that interested. But, according to Backbone Bourbon Company, a Bone Snapper is basically an attention-getter.

Bone Snapper comes as either a small batch or, in the case of a store pick, a single barrel. The standard expression, which is the small-batch version, is bottled at 108°. An option for the store pick is barrel proof. Either way, you're in for a serious sip. It is distilled from a mash of 95% rye and 5% malted barley, then once ready, non-chill filtered and bottled. Bone Snapper is sourced from MGP of Indiana.

Today, I'm reviewing a Bone Snapper's Niemuth's Southside Market store pick named Darkest Sorcerye. This one was barrelled in June 2013 and aged for 6.5 years until it was dumped in November of 2019. The barrel proof option rings in at 119.8°. Retail is $64.99.  I'd like to thank Niemuth's for providing me a sample in exchange for a no-strings-attached honest review. Time to #DrinkCurious...

Appearance:  Darkest Sorcerye appeared in my Glencairn glass as a deep, orange-amber. It left a very thin rim on the wall, which led to fatter legs that slowly dripped back to the pool of liquid sunshine.

Nose:  Cherry and plum blasted me in the nostrils as I picked up the glass and brought it toward my face. Once there, rye spice and oak were evident. Underneath all of that was a lovely mix of mint and chocolate, sort of like an Andes candy. When I inhaled through my lips, the plum was back and this time it joined with vanilla bean.

Palate:  The first sip gave a very thin, light and airy mouthfeel. Subsequent ones never gained weight or viscosity. But it sure numbed the hard palate!  At the front, an interesting combination of milk chocolate and cocoa started things off. At mid-palate, the chocolate disappeared and was replaced by vanilla, rye spice, and dark fruits. Then, on the back, the chocolate returned, this time a definitive dark version which married with oak.

Finish:  The finish was very, very long. It started off as white pepper, then was joined by dark chocolate. As those two danced with each other, that oak from the finish rolled in and out like it was a series of waves.

Bottle, Bar, or Bust:  When you consider that Darkest Sorcerye is barrel-proof whiskey, the price isn't out of line. The nose and palate provide plenty of complexity and I really enjoyed the two types of chocolate from the front to back of the palate. I've been very impressed with Niemuth's ability to pick barrels. In full disclosure, I've joined Niemuth's in picks, but Darkest Sorcerye was not one of them. However, were I on the selection committee, I would have been proud to have this one associated with my name. When I combine all of this, it easily earns my coveted Bottle rating.  Cheers!
My Simple, Easy to Understand Rating System
Posted by Whiskeyfellow at 6:45 AM