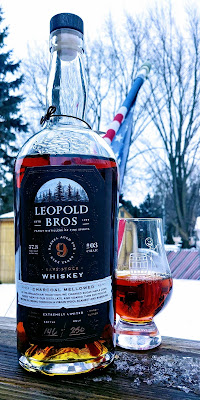 I've been familiar with Leopold Bros for several years. It is located in my old stomping grounds of northeast Denver, Colorado not far from what was the old Denver Stapleton Airport. If you've never heard of Leopold Bros, they're quite unique. It is a family-owned distillery established in 1999, and they have their own malting floor. Yeah, you read that right, and it isn't just a malting floor, but it is the largest malting floor in the United States. Everything is done in-house, they even grow the botanicals that attract the wild yeast used in the secondary fermentation on the distillery premises.

To celebrate their 20th Anniversary, Leopold Bros released a very limited edition whiskey. By limited edition, only 250 bottles were produced. It has a simple name:  Rare Stock Whiskey.

Rare stock whiskey is distilled from a mash of 58% corn, 23% malted barley, and 19% rye. But, before setting it in wood, it soaked in charred sugar maple wood chips for several months. That, right there, prevents this whiskey from being Bourbon. Todd Leopold told me that they charred the wood chips themselves and he went for a very heavy char with the intention of having a smoky quality. After it steeped, it was filtered through a non-dyed, virgin wool blanket in the tradition of Appalachia. Then, the barreling took place. Leopold used 53-gallon, #3 charred oak barrels, let it rest for nine years before dumping. It was then bottled uncut at 114.6°. All of the bottles were sold via a lottery at the distillery for $125.00. As such, the only way to find it is on the (cough, cough) secondary market. I was given my bottle as a gift from very dear friends who knew I would appreciate it.

If you were to seek out a bottle of Rare Stock Whiskey, is it worth the quest? Let's get on to the tasting notes. Time to #DrinkCurious...

In my Glencairn glass, Rare Stock Whiskey presented as a deep burnt amber. That's the color Mrs. Whiskeyfellow used when I showed her my glass, and that works just fine for me. It created a medium rim that generated fast, thicker legs that raced back to the pool of liquid sunshine.

An aroma of candied fruits greeted my palate before the glass got close to my face. Once that happened, a marriage of smoke and vanilla took over before giving way to dark stone fruits. When I inhaled through my lips, the smoke and vanilla changed to smoked caramel and oak.

And then, there was the mouthfeel. It was thick and creamy, but it was also a smoke bomb in my mouth. That took me by complete surprise, enough so that I started coughing and Mrs. Whiskeyfellow wondered what happened. There was nothing bad about it, it was just unexpected. It also was a reminder of one of my standard lessons in classes I host:  Never judge a whiskey on the first sip. Once my palate was past the shock of the smoke, I was able to pick up flavors of plums and cherries. Past that, maple and tobacco leaf. Then, on the back, it was charred oak and clove.

The finish was long. Very, very long. It started off as heavy smoke and clove. The smoke dissipated, leaving the clove to carry on. Then, the clove faded off.

When I write reviews, I have a pad of paper that I use to take notes. As I go through nosing and tasting, I jot things down. After my first glass, I start tweaking those notes. This is not a short process, it takes many minutes. I am taking this segway because it is illustrative of how long it took the finish to end. After the clove faded off, there was nothing. As I was tweaking my tasting notes, my entire mouth got walloped by dark cherries. I've had whiskeys take a hiatus in the finish, but nothing like this.

Bottle, Bar or Bust:  I want to say two things here.  First, let's not confuse smoke with peat. This is a smoky whiskey, it is not a peaty whiskey. Second, let's look at this one logically. You aren't finding this bottle on through conventional means. That means you're getting it one of two ways: Someone is going to gift it to you (like me) or sell it to you. I have no idea what Rare Stock Whiskey is worth on the secondary market. I can tell you this much - this is about one of the most unusual American whiskeys I've ever tasted, and that's a compliment. If you are offered a chance to buy this and it isn't offered at an obscene price, grab it. I'm enjoying the hell out of mine, and as such, it gets my coveted Bottle rating. Cheers!
Posted by Whiskeyfellow at 6:47 AM