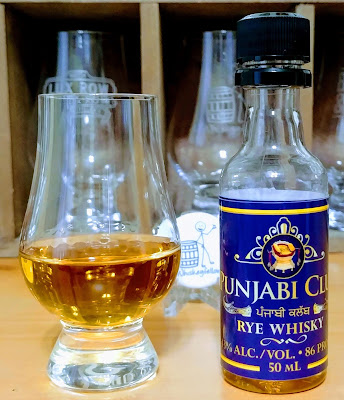 Microdistilleries are interesting because you never quite know what to expect. Some micro distillers are very talented and know what they're doing. Others have, well, unique spirits that their family and friends "enjoy" because they know the distiller and don't want to be rude.

In 2019 Mrs. Whiskeyfellow and I took one of our random road trips and we found ourselves in Monroe, Wisconsin. If you're not familiar with Monroe, it is known as the Swiss Cheese Capital of the United States.  One of the businesses in Monroe is the Minhas Craft Brewery, which is home to the brewery, a restaurant, a gift shop, and a microdistillery.  The brewery is actually the second oldest in the nation. and has a sister operation in Calgary, Canada where the owners, Ravinder and Manjit Minhas reside. The distillery was established in 2006 and utilizes a 1000-gallon, 45-foot column still to make various spirits. For what it is worth, the tasting room is a fun experience, presenting an opportunity to try a wide variety of liqueurs and spirits.

Today I'm reviewing Punjabi Club, which is a Canadian Rye whisky. What you can make from that is it was not distilled in Monroe. The rules for Canadian Rye are fast and loose things but one of the few requirements is that at least 91% of the whisky must be a product of Canada.

The age and mash bill are undisclosed. While Canadian whisky must be aged at least three years, one thing to keep in mind that just because the word rye appears on the label of Canadian whisky, there is no requirement for even a single grain of rye to be in the mash. In the case of Punjabi Club, from my sipping experience, there is likely a significant amount of rye content.

Punjabi Club is bottled at 86° and can be purchased both at the distillery and online from a few outlets. Retail for a 750ml is about $24.99. How does this one taste? Time to #DrinkCurious and find out.

In my Glencairn glass, Punjabi Club appeared as the color of straw and was clear and bright. It left a medium-thick rim that created a thick, heavy curtain. Once the curtain dissipated, fat, slow legs were left behind.

The initial nosing was aromas of heavy oak and floral rye spice. Beneath those, I found orange citrus and mint. There was also a certain musty quality of wet wood. When I inhaled through my lips, flavors of ginger and oak started off and then became sweet red pepper.

A light but oily mouthfeel greeted my palate. Rye spice and oak dominated the front. At mid-palate, it smoothed out to a nice mix of pineapple, citrus, and spearmint. On the back, rye spice returned, this time with white pepper and tobacco.

The finish was initially short, but that turned out to only be a hiccup. Just as it fell off, it suddenly built and lasted for almost a minute. A blend of very dry oak and white pepper started both initially and returned for the comeback. Then, it got very sour. I can't say I've ever experienced a sour note with whiskey before. It was both unexpected, unpleasant and overshadowed the entire drinking experience.

Bottle, Bar or Bust:  The $24.99 price tag is very enticing. I tell people all the time that price doesn't dictate quality. After all, I am Mr. #RespectTheBottomShelf. Unfortunately, Punjabi Club is not a bottom-shelf gem. Aside from the very sour finish, I was turned off by the musty nose. This is one that I would just avoid, and as such, I have no qualms rating it a Bust.  Cheers!
Posted by Whiskeyfellow at 8:40 AM