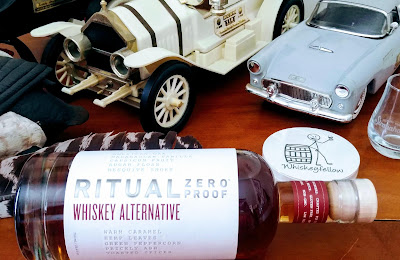 The very short answer to the final question is it is a non-alcoholic beverage meant to mimic whiskey. There's a rhyme to the reason of my reviewing a synthetic whiskey. First of all, there's the whole #DrinkCurious lifestyle. Second of all, some of us partake in Dry Januarys or Dry Weeks. Or, maybe we're on some medication and can't drink, or we're a designated driver but we want to enjoy a "drink" without impairment. Or, if the horrible thing happens, something comes up where we have to give up alcohol. Egad, that last thought just gave me the heebie-jeebies!


Ritual Zero Proof Whiskey Alternative is what I'm working with today, and this review is going to be different than others. I've already been warned by Ritual that a whiskey connoisseur won't be fooled into thinking it was real whiskey. If you look at the label, it also states Ritual Zero Proof is meant to be mixed in cocktails. The packaging even suggests cocktail recipes. And, that's exactly what I'm going to do - make one of their suggested cocktails - after I do a small neat pour.


But, I won't end the trial there. I'm going to put that cocktail up head-to-head with the exact same recipe, just substituting real whiskey for the whiskey alternative.


Before I get started, I need to provide you with some background on the Ritual whiskey alternative. It is made with some pretty simple ingredients:  filtered water, invert sugar, natural flavors, xanthan gum, citric acid, sodium benzoate, and potassium sorbate. That's it. A 1.5oz pour costs you an entire ten calories. It is also gluten-free. One caveat is that once opened, you have six months to finish the bottle or it needs to be disposed of. Retail is about $25 and you can even buy it off Amazon. Finally, there's no math to do when figuring things out. Ritual suggests a 1:1 swap-out on the real thing.


I'd like to thank Ritual for providing me with a sample of the Zero Alcohol Whiskey Alternative in exchange for a no-holds-barred, honest review.


For the first part of this review, I'm going the standard route and will sip this from my trusty Glencairn glass. 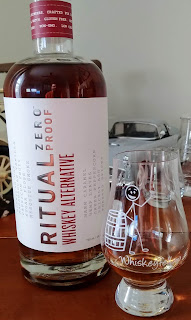 In my glass, Ritual Zero Proof appears as a cloudy amber, almost like a common beer. It didn't leave any sort of rim on the wall but did leave behind some globby droplets on the side of the glass.

Barrel char and wintergreen fragrances smacked me in the face. There was also a definitive medicinal aroma along with green pepper. When I inhaled through my lips, it was all green pepper.


It had a very watery mouthfeel. I'm going to stop this right now for a segway. I do not like green peppers. I pick them out of anything I ever find them in. Well, if green peppers are your thing, you're going to be in absolute heaven. Once I got past the palate shock, I was able to discern other things. I found green peppercorn (not to be confused with green peppers), and then a sour flavor I couldn't nail down.


The finish was long-lasting green peppercorn and char. By long-lasting, I mean it just sat there, it didn't build, it didn't fade, but it went on for many minutes.


For the next part, I'm going to make two Old Fashioneds:  One with Ritual whiskey alternative and the other with JW Dant Bottled in Bond Bourbon. They will be otherwise identical in every way, including using the same kind and design of glass. To make this simple Old Fashioned with Fee Brothers West Indian Orange Bitters, Stirrings Simple Syrup, and Traverse City Whiskey Company's Premium Cocktail Cherries. On a side note, those cherries happen to be the best of any cocktail cherries I've ever had. Ever. 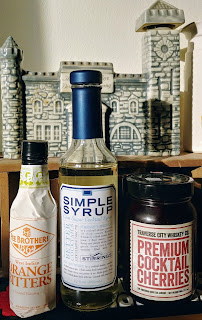 The recipe is easy:  2oz Ritual whiskey alternative, 1oz simple syrup, 2 dashes orange bitters, and garnish with a cherry. I may modify this with several cherries - they're so fantastic. 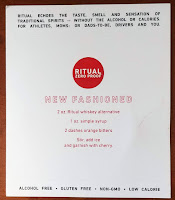 Because I do not want to give an unfair advantage to either cocktail, I'm even using identical cocktail glasses. I went as far as to use the same cocktail stirrers, one in each, so as to not contaminate one with the other. 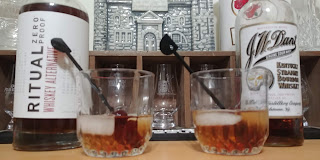 So, how did these Old Fashioneds taste?  I could absolutely tell the difference between the two. But, in all honesty, that was expected. The Ritual wasn't bad at all and was, in fact, completely drinkable. I would have guessed it to be an Old Fashioned made with something from a bar's well draw.  I've had similar in my life many times over.


Bottle, Bar or Bust:  As a whiskey drinker expecting whiskey, this is an easy Bust. Drinking it neat, again, an easy Bust. However, this isn't whiskey and it wasn't meant to be drunk neat, this is supposed to give some semblance of whiskey for folks who aren't drinking whiskey. For my Pseudo-Old Fashioned, I think this passes the test. In a highly unusual move, I'm giving it a Bottle rating for performing as advertised. Cheers!