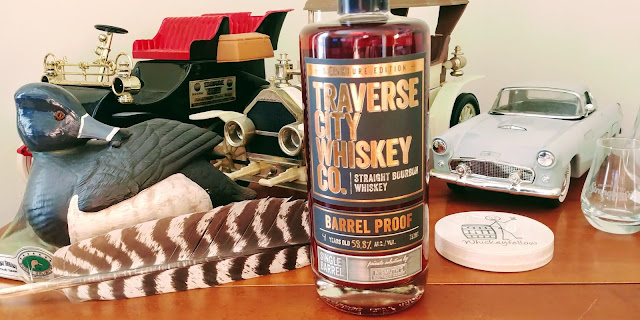 I've had a handful of opportunities to try Traverse City Whiskey's Barrel Proof Bourbons. All of these, with the exception of one, have been store picks. Each barrel, as expected, is different enough from one another to ensure each one is a new and different tasting experience. Today, I'm reviewing one for Niemuth's Southside Market of Appleton, Wisconsin which is called Birthday Bu'rl.

Full disclosure time - I have been involved in a few barrel picks with Niemuth's. I was not involved with Birthday Bu'rl. However, I was provided with a sample for a no-strings-attached review, and I thank them for the opportunity.


If you're unfamiliar with Traverse City Whiskey, it does have its own distillate, which is used in its American Cherry Edition and Port Finished whiskeys. In the meanwhile, their older whiskeys are sourced from MGP from Indiana, giving it a mash of 75% corn, 21% rye and 4% malted barley. All of their barrel proof whiskeys are aged at least four years. In the case of Birthday Bu'rl, it was Barrel #P421 and aged four years before being bottled at 117.6°. Niemuth's retails theirs for $68.99 and the yield was 210 bottles.


Is this one of the better Traverse City picks? The only way to find out is to #DrinkCurious, so here we go...


Appearance:  In my Glencairn glass, Birthday Bu'rl appeared as a definitive orange amber. It left a very thin rim on the wall, but created very heavy, wavy legs that crawled back to the pool of liquid sunshine.


Nose:  Oak was very forward on the nose. But, that was joined with bright berry fruit. Further exploration brought cinnamon and vanilla bean.  When I inhaled through my lips, it was a berry blast.


Palate:  The mouthfeel was thin and coating. However, this definitely did not drink at its proof. Or, at least I didn't think so. My hard palate numbed up well enough, but there was no real burn to it, and as such, I didn't notice the tingling until my fourth or fifth sip. At the front were cedar and chocolate. Then, at mid-palate, I found pecan and coconut, making for a very interesting combination. The back was spicy with clove, coffee, and dry oak.


Finish:  Birthday Bu'rl's medium to long finish gave a warming hug. It started as toasted oak (versus the dry from the back of the palate), tart cherry, and cocoa. The more I sipped, the longer the finish grew.

Bottle, Bar or Bust:  First and foremost, I enjoyed the heck out of Birthday Bu'rl. But, I've faith in Niemuth's selection process, based upon a number of different experiences. Secondly, I've yet to have a bad Traverse City pick, and Birthday Bu'rl is no different. I happen to love barrel proof whiskeys that drink under their stated proof. While there are certainly lower-priced barrel proof Bourbons in the market, $69 isn't obnoxious and it is difficult to put a price on personal enjoyment. I'm happy to have this one in my whiskey library, and as such, offer my coveted Bottle rating. Cheers! 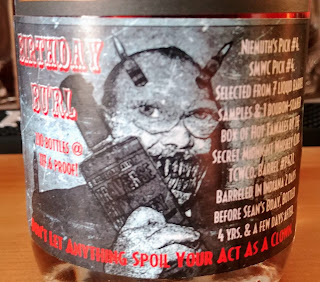 My Simple, Easy to Understand Rating System
Posted by Whiskeyfellow at 6:49 AM