Are You Ready to Become a Whiskey Master? 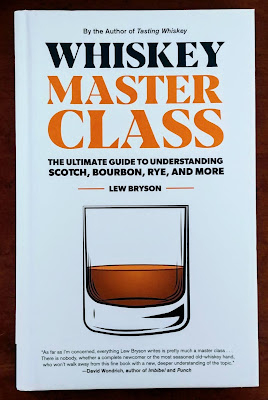 Do you know of Lew Bryson? If you enjoy whiskey or beer, he's a prolific writer of those two subjects. He was an editor at Whisky Advocate for two decades, he writes for various publications and websites, and he's penned his share of books. His latest work, Whiskey Master Class, was released in February.

Full disclosure time. I know Lew. We live in different states, but we've met and I consider him a friend. But, the reason I know Lew at all is that we're both whiskey writers, we've followed each other for a few years, and our paths finally crossed at Distill America in 2019.

Despite that, Lew isn't getting a free pass out of me any more than distillers I'm friends with would get softball reviews on their whiskeys. At the end of the day, I need to be impressed and I need to look at myself in the mirror knowing I was unbiased in my review.

I've not talked to Lew much at all about his book. He knows I own a copy because I snapped the photo below and I posted it to his Facebook page the day it arrived. I told him I'd review it. But, my review and notes are as new to him as they are to you. 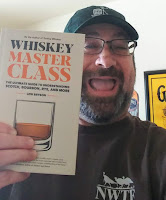 Its appearance reminded me of textbooks from high school and college. Whiskey Master Class has an off-white cover with simple block lettering. Inside, there are several segway featured snippets much like you'd find in your average (as I remember them) textbook. But, that's how it presents and something tells me that's what Lew was shooting for.

Let's get past the notion of a textbook.  I don't know about you, but I recall most of my educational textbooks as dry and boring. There was a reason that I majored in English, and it was so I could read real books instead of stuff that made me daydream about anything else. Instead, Lew has a writing style that's similar to my own. He writes in a conversational tone. In my opinion, it eases reading comprehension because it is closer to how most minds process (and retain) information versus simply choking down facts and figures to memorize.

What if you're fairly new to whiskey? While this is a master's class, Lew breaks it all down in terms that anyone can grasp. He talks about the science of whiskey, but you don't have to be a scientist to understand it. He takes the time to explain things in such a way that you're learning without even realizing it.

What if you know a lot about whiskey?  You won't find Whiskey Master Class boring or Lew simply regurgitating what you already know.  He includes things that would likely never cross your mind, and he doesn't make you feel like an idiot for not knowing them. More likely, you're going to say, Wow, that's pretty cool. I did. Several times.


New to whiskey or not, you're going to be exposed to pretty much everything from the grain to the palate without getting overwhelmed.

Bottle, Bar or Bust:  It is weird using my standard rating system for a book. But, that's my schtick and I'm sticking to it. Whiskey Master Class is absolutely informative. About the only thing I can complain about is the dual-column typesetting used throughout the book. For my aging eyes, it added some strain. And, if I am going to get really picky, the dual-column format might have worked if the text was justified.

I read a lot of articles. I talk to many distillers and brand ambassadors. I do a lot of research because, well, whiskey is my hobby and business. And, after saying all of that, after reading Whiskey Master Class, I walked away with newfound knowledge. I was also entertained. For me, that means I didn't waste money, and that means it earns my Bottle rating.  Cheers!
Posted by Whiskeyfellow at 6:37 AM