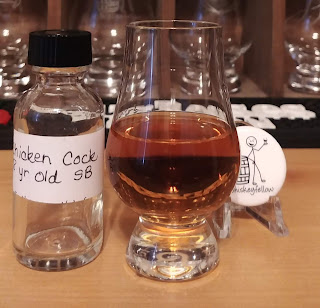 Chicken Cock. For many of my maturity level, the name at the very least makes you smile. But, truth be told, Chicken Cock is one of the oldest Bourbon labels around. Founded in 1856 in Paris, Kentucky, the label survived Prohibition before a fire devastated the distillery in the 1950s. Then, in 2013, the brand was relaunched by Grain and Barrel Spirits.

Obviously, you don't start distilling and bottling right away. If you're going to bring something back to the market quickly and require an age statement, you're going to do that by bottling someone else's whiskey. In the case of Chicken Cock 8 Year, the source is MGP of Indiana. It was then aged in Owensboro, Kentucky.

Made from a mash of 70% corn, 21% rye and 9% malted barley, Chicken Cock is not the standard distillate from MGP.  While this is a single barrel Bourbon, there were 30 different barrels chosen, creating about 7200 bottles total. Each of the barrels had #4 char for the staves and #2 char for the heads.  Once dumped, they were diluted to 90° and retail was set at $100.00. As this was a special release to celebrate Chicken Cock's 160th anniversary in 2017, bottles are probably still out there but may be difficult to find.

But, the real question is, should you invest your time tracking it down?  I'll help answer that question now thanks to a friend who provided me a sample for review. Time to #DrinkCurious.

In my Glencairn glass, Chicken Cock presented as a bright coppery amber. It left a thin rim that generated a fat, wavy curtain that took its time dropping back to the pool of liquid sunshine

Aromas of caramel and mint greeted me initially.  Underneath those were oak and orange zest. When I inhaled through my lips, it was a blend of vanilla and oak.

A thin and oily mouthfeel got all over my palate. On the front, it was caramel, which led to oak mid-palate. On the back, it was peppery. This culminated in a medium-long finish of black pepper, charred oak, vanilla, and finally dry oak.

Bottle, Bar or Bust:  You'll notice there aren't a lot of notes, especially on the palate. That's not me being lazy, rather, there simply wasn't a lot going on. Chicken Cock was decent, but nothing special. It certainly is not a $100 Bourbon no matter what the company claims it is.  There are a lot of Bourbons and Ryes that cost a c-note and some even earn it. But, there is no way in my opinion to justify the cost. And, because the price way outweighs the value, I'm going to rate this one a Bust. Cheers!


Posted by Whiskeyfellow at 8:54 AM