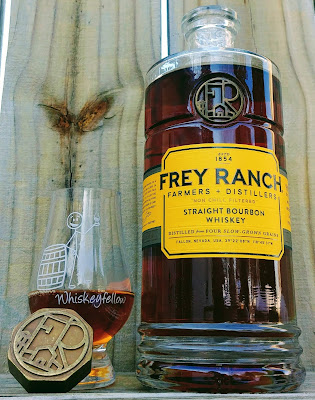 Nevada whiskey? Nevada? Really?  It is no secret that Bourbon is made in every state, but when you think Bourbon, one of the last places that would ever cross my mind is Nevada. Nevada is all about tourism, mining, and cattle ranching.

But, in Fallon, Nevada, there is an outfit called Frey Ranch.  It is a working ranch dating back to 1854 and in the last several years, they've been distilling whiskey. When I say distilling, I mean really distilling, not sourcing and bottling someone else's product. In fact, Frey Ranch is a complete grain-to-glass distillery. Colby Frey, both farmer and distiller, grows his own grains on over 2000 acres in the Sierra Nevada Watershed.

The grains Colby uses in his Frey Ranch Straight Bourbon creates a mash of 66.6% corn, 12% malted barley, 11.4% winter wheat, and 10% winter cereal rye.  He then ages the distillate for at least four years. The entire production process happens on site.  It is placed in an attractive package with a hefty bottle embossed with the ranch's registered brand. 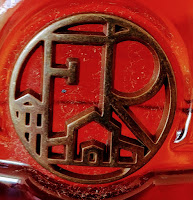 But the craziest (in a good way) part of the package is the stopper. It is bronze and weighs a ton. The entire thing gives you a perception of quality. And, with that statement, I'm going to go off on a brief tangent.

To state the obvious, packaging is all marketing. It offers nothing with regard to the real quality of the whiskey inside. As a matter of fact (and admitting my own bias), when I see a fancy package, I tend to cringe a bit because I assume fancy bottles are used to sell lesser whiskeys.

Frey Ranch Bourbon is bottled at 90°, is non-chill filtered, carries no age statement, and retails for about $50.00. Currently, it is distributed in Nevada and will be available next in California.

And now, it is time to #DrinkCurious and learn if this is just another mediocre whiskey in a sharp-looking bottle or something special. Before I get started, though, I'd like to thank Frey Ranch for providing me a sample in exchange for a no-strings-attached, honest review.

In my Glencairn glass, Frey Ranch Bourbon appears as a definite orange amber. It left a medium-thick rim and medium, fast legs to drop back to the pool of liquid sunshine.

Aromas of apples and pears tickled my olfactory senses. Beneath those was brown sugar which made my mouth water a bit. Then, the smell of baked goods took over.  When I inhaled through my mouth, crisp apple became obvious.

My first sip gave a thin and light mouthfeel. Subsequent sips added some viscosity but it never became what I could describe as thick.  The first flavor to hit my palate was oak. That was soon joined by cinnamon. Then, at mid-palate, something magical happened:  I was suddenly eating a caramel apple. It wasn't caramel and then apples, it was both simultaneously. On the back of my palate, I found black pepper mixed with light char.

That black pepper followed into a very long, slow finish. The black pepper gave way to rye spice. The rye hung around for a bit, then became caramel. The caramel transformed to oak, and the oak morphed to apple. If you can picture these flavors walking down a staircase, that's a good description of how it happened... one flavor for each step.

Bottle, Bar or Bust:   You'll notice that you didn't read anything negative in this review. That's because I didn't find anything that was a turn-off. While the palate wasn't overly complicated, the finish definitely was. When I take into account that this is priced smack in the middle of your average "craft" whiskey, this little Nevada distillery opened my mind to what else the state may offer. As such, it earns my coveted Bottle rating. Cheers!

Posted by Whiskeyfellow at 11:31 AM