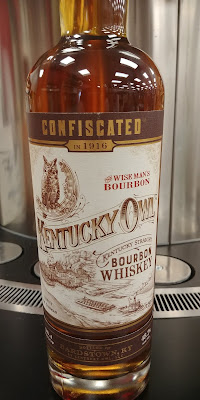 Some whiskey brands come on the scene with a whisper, others with a bang. Kentucky Owl is one of the latter. Oh, don't get me wrong, Kentucky Owl is technically not a new brand. It was founded in 1879. But, it also is one of those brands that went away and was recently resurrected. They started with blending Bourbon in 2014 and Rye in 2017. They've been bought out by Stoli and have started constructing a massive campus in Bardstown. There are other things going on, but one of the bang qualities is the price.  Kentucky Owl came on the scene as an ultra-premium whiskey and continues to charge ultra-premium prices.

I will say this much. I have a couple of bottles of Kentucky Owl Rye Batch 1 and it is stupendously delicious. I've seen Batch 2 and was reluctant to pull the trigger, especially after reading some unflattering reviews (mostly comparing an even higher price tag and lower proof than Batch 1). I've tried some of their Bourbons and been impressed. Then, Confiscated hit the market, commanding a $125 suggested pricetag. It carries no age statement, no one knows who in Kentucky actually distilled it, and we're not sure of the mashbill (which would likely give away the distiller). But, we do know it is at least four years old, and it is bottled at 96.4°.

I have a good friend in Florida who owns Fine Spirits Wine & Liquors in Cooper City. He was kind enough to let me sample Confiscated in exchange for a review.

In my Glencairn glass, Confiscated presented as a deep amber with reddish tones.  It left a medium rim that generated thick, slow legs to drop back to the pool of liquid sunshine.

Aromas of vanilla and caramel dominated my senses.  Beneath those was an absolutely lovely rye spice blended with oak.  I also picked up a hint of pear. When I inhaled through my lips, it was very much a vanilla bomb.

With my first sip, the mouthfeel was creamy and coating. Subsequent sips kept the creamy factor but it also became oily. Initial flavors of vanilla and dried nuts greeted my palate. That switched up to mint mid-palate, suggesting a higher rye content, and, on the back, it was dry oak and black pepper. The finish was medium-to-long with oak and tobacco and leather.

When my friend asked what I thought, I said I was underwhelmed. He suggested I let it sit for an hour and then revisit it. Normally I'd pass on that opportunity because that's not how I handle reviews in a real-world setting. I give any whiskey plenty of time to breathe before trying it. But, he made the request and I'm always happy to accommodate someone's curiosity (after all, that's all part of the #DrinkCurious lifestyle).

When I came back to Confiscated, there wasn't a lot of change.  I picked up berry notes on the nose and when inhaling through my lips. Aside from that, it was the same Bourbon.

Bottle, Bar or Bust:  I've technically rated this twice. I have enjoyed much of the Kentucky Owl that I've encountered. There is always a return on investment to consider when buying anything, and whiskey is subject to that same equation. Confiscated is good. But, at $125, I want something to be great. Confiscated wasn't that, at least not for me, and in both tastings, I gave this a Bar rating. Try this at a good whiskey bar before you try it. Confiscated has been on store shelves awhile and there should be no fear of missing out.  Cheers!
Posted by Whiskeyfellow at 6:26 AM