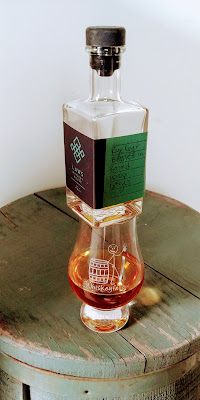 Just outside of downtown Denver is a fairly nondescript building. It looks like many of the other warehouses in the neighborhood. You could drive right by it and never know that inside one is Laws Whiskey House.

A.D. Laws, as it is known, is not a newcomer to the whiskey scene. They've been doing this since 2011. Al Laws, with mentor Bill Friel (formally of Barton, and a member of the Kentucky Bourbon Hall of Fame), share a philosophy of using local grains to create unique whiskeys. They source all of the grains from two family-owned farms:  Colorado Malting Company in Alamosa and the Ohnmacht's in Eastern Colorado. They're using only heirloom lower-yield grains, making mass-production difficult. However mass production isn't something that excites Laws.

On a side note, Laws brought the first Colorado Bottled-in-Bond whiskey to market.

Today I'm reviewing their six-year San Luis Valley Bottled-in-Bond Rye. There has been a four-year version, but this year they upped the age statement. Bottled-in-Bond is a category that always gets my engine roaring. I love it for its purity and lack of shady backstories. The Bottled-in-Bond Act of 1897 requires truth in advertising. Any whiskey carrying this label must be aged at least four years in a federally-bonded warehouse, must be bottled at 100°, must be a product of the United States, must be a product of one distiller from one distillery in one distilling season, and the label must state who distilled it, and, if different, who bottled it.

The mash is made from 100% rye.  Half of it is malted and the other is raw. That's it. It ferments in an open-air environment using a sour mash method. It is then distilled through their four-plate pot still, and aged in new, charred oak 53-gallon barrels. Retail is about $54.99 and A.D. Laws distributes in 16 states plus the District of Columbia. At this time it is available in California, Colorado, Illinois, New Jersey, and Texas have received a distribution.

How does this Bonded Rye taste?  Is it worth the price?  The only way to find out for sure is to #DrinkCurious. But first, I'd like to thank Laws Whiskey House for sending me a sample of San Luis Valley Rye in exchange for a no-strings-attached, honest review.

In my Glencairn glass, San Luis Valley Rye presents as a definitive orange amber. It left a medium rim that generated medium-fast legs to drop back to the pool of liquid sunshine.

To suggest this whiskey was fragrant would be an understatement. From across the room, Mrs. Whiskeyfellow stated as much. It was an aroma of orange blossoms and honey, which upon closer inspection revealed mint, oak, and floral rye.  When I inhaled through my lips, it was grassy and orange citrus.

The mouthfeel started off thin, but as I continued to sip, it became thicker and creamy. The first taste was brown sugar and orange peel. As it moved across my palate, I picked up sharp rye spice and mint. Then, on the back, a blend of tobacco leaf and barrel char.

It culminated in a very, very long finish. This is one of those whiskeys that make you think it is done but fools you. Initially, it was toasted oak, sea salt, and clove. It was both warm and spicy. Round two was short-lived and full of coffee.

Bottle, Bar or Bust:  Craft whiskey normally runs between $40 and $60.  So long as something doesn't cross that, it doesn't raise my eyebrows. But, if a whiskey doesn't taste good, even a rock-bottom price doesn't make it a bargain.  Fortunately, I found San Luis Valley Rye to be a tasty, complex Bottled-in-Bond Rye. It offered a lot from the nose to the palate and the palate to the finish. This one fits the bill, and I'm happy to rate this one as a Bottle. Cheers!
Posted by Whiskeyfellow at 3:05 PM