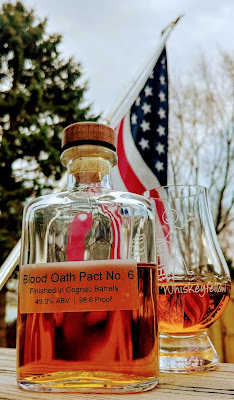 The human body has, at least in theory, an average temperature of 98.6°F.  That's how hot the blood is that churns through our veins. A blood oath was a serious promise between two parties to adhere to an agreement. And, those promises were sealed by blood:  the parties involved would cut their hands and their blood would mingle together.

But, these days, we would probably not be too keen on participating in a blood oath. There's just too much ickiness and risk involved.

Speaking of risk, Lux Row Distillers takes one on annually with their Blood Oath series. They're always doing something out of the ordinary in an attempt to create something new.  I've reviewed Pact 4, which I found to be good but questionable for the price, and Pact 5, which I disliked the finish but enjoyed the remainder. Both took Bar ratings from me. So, when Lux Row sent me Pact 6, I was curious if this would eclipse the others or be another maybe whiskey.

Pact 6 is a blend of three Kentucky Straight Bourbons:  one at 14 years, one at 8 years, and the last, 7 years. However, the 7-year is finished in ex-Cognac casks before the three are married. The mashbill and cooperage are undisclosed. Legally, any age statement must represent the youngest whiskey in the blend, but Pact 6 doesn't carry one. And, in the tradition of a real blood oath, the proof is that of blood:  98.6°.  It is packaged a nice bottle with a collectible wooden box and retails for $99.99. This is a limited edition run with 17,000 cases produced.

How does Pact 6 hold up?  Will it get something besides the Bar rating? The only way to find out for sure is to #DrinkCurious.  But first, I'd like to thank Lux Row for sending me a sample in exchange for an honest, no-strings-attached review.

In my Glencairn glass, Pact 6 appears as a deep amber.  It created a medium rim which led to fat droplets that slowly worked its way back down to the pool.

Aromas of caramel and brown sugar greeted my nostrils. Beneath that was a bouquet filled with apricot, vanilla, and oak. When I inhaled through my lips, it was thick butterscotch.

The mouthfeel was oily and warming. At the front, I discovered caramel, oak, and a big punch of leather. As the liquid sunshine moved across my palate, I found sweet apricot, spicy clove, and toffee.  Then, on the back, a return of the oak and, finally, crème brũlee.

A long-lasting finish of rye spice and dry oak was uncomplicated but pleasant. Pact 6 did offer much more of the Cognac profile than I would have expected, especially since only one component was finished with it.

Bottle, Bar or Bust:  Here's where the pedal hits the medal and we fly down the road smoothly or wreck in a fiery mess. The blending was well-done, and I am intrigued by Cognac-finished whiskeys. It adds a completely different nuance to the profile - if done correctly. I enjoyed the heck out of both the nose and the palate. They were complex and enticing. The finish made me feel like I was drinking Cognac, which is a positive. Pact 6 is, in my opinion, the best of the series so far and I believe a good return on a $99.99 investment. As such, I'm pleased to offer it my coveted Bottle rating. Cheers!

Posted by Whiskeyfellow at 6:48 AM