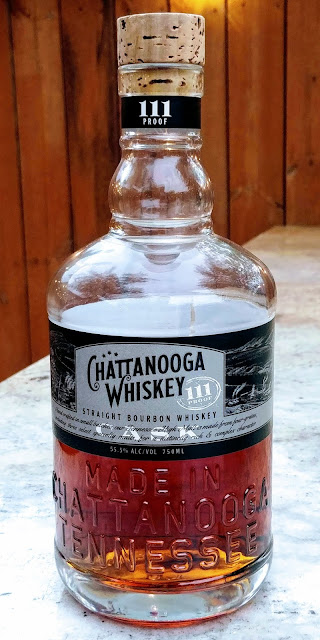 Is that the Chattanooga choo choo?

Boy, you can gimme a shine.

to board the Chattanooga choo choo?

I've got my fare,

and just a trifle to spare.

I'm not here to sing the accolades of a train, but I am reviewing a whiskey from Chattanooga. In fact, that's the name. Chattanooga Whiskey.  This would be their cask strength Bourbon.

The cask strength is a four-grain Bourbon, with three of those grains consisting of different malts.  They call it a Tennessee High Malt Bourbon.  The mash is yellow corn, malted rye, caramel malted barley, and honey malted barley. It aged two years and was made in small batches from between eight and twelve barrels.  Today, I'm reviewing Batch 19G19R, which is unfiltered, bottled at 111° and retails for about $44.99.

In my Glencairn glass, Chattanooga appears as a burnt orange amber. It left a thin rim on the wall that led to thin legs. Those legs raced back to the pool of liquid sunshine.

Aromas of caramel and chocolate hit me hard, and underneath that was fruitcake. Not the crummy one that gets passed along year after year with no one ever enjoying it, but the good kind, the one soaked in alcohol, the one that everyone digs into.  When I inhaled through my lips, it was a mixture of honey and caramel.

When the liquid passed my lips, it was a very thin mouthfeel. My first thought was, This is 111 proof?  At the front of my palate, it was as if I stuffed a Bit O' Honey in my mouth. That was soon followed by a train of dark chocolate, vanilla, and cherries. Then, on the back, I tasted toasted oak and a pleasant smokiness. The finish was a very, very long ride down the tracks with white pepper.

Bottle, Bar or Bust:  Chattanooga is a two-year-old Bourbon that is far more mellow than you'd expect. My guess is that it had something to do with the various malts.  This was a very unique pour and interesting would be an unfair description. When you combine that with the low price, especially considering it is barrel proof, it becomes more and more attractive. I enjoyed drinking this, and I believe you will, too. As such, it takes my coveted Bottle rating.  Cheers!

Posted by Whiskeyfellow at 6:38 AM