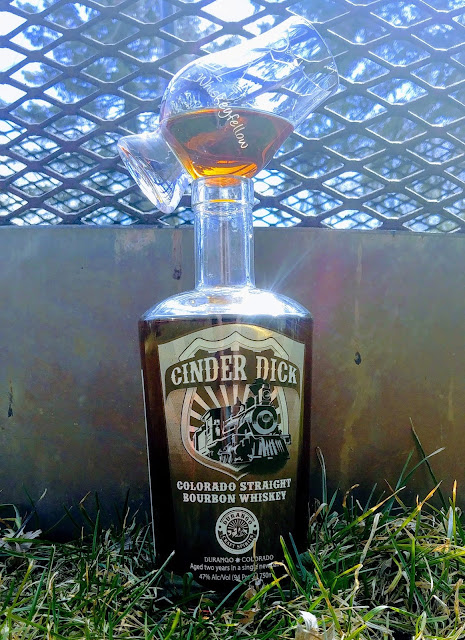 I have the maturity level of a grade-schooler. Well, let's get real - it isn't quite that mature. I love sophomoric humor - the more immature the better.

When I first saw the name Cinder Dick I knew I had to have this Bourbon. The first words out of my mouth were, "Good, bad or ugly, I need to review this. It would be a ton of fun."  Durango Craft Spirits proprietor, Michael McCardell, responded and told me this would be the best Bourbon I've ever had.

The fact that I'm a serious reviewer makes me want to tone down poking fun of the name. But, I'm going to do it anyway. Cinder Dick?  What's that, a burnt woody?  And then my mind went to Cinderella and it devolved from there into stuff I don't even want to put in print.

On a far more serious note, Cinder Dick is slang for a railroad detective. The name is relevant to the Durango, Colorado area where it is distilled because of the world-famous Durango-Silverton Narrow-Gauge Railroad. Cinder dicks rode the rails to protect valuable cargo such as building materials, bullion, and, of course, cash. On a very brief segway, this railroad offers one of the most beautiful scenic train rides you'll ever experience. I used to live in Colorado and it is something you should have on your must-see list.

Durango Craft Spirits is located in (you guessed it) Durango. It is the first post-Prohibition grain-to-glass distillery in the area. It handles everything from mashing to distilling to barreling on-premises. Grains come from the surrounding area. In the case of Cinder Dick, it is a mash of 66% non-GMO white corn from the Ute Mountain Tribe, with the remainder using wheat, rye, and two-row malted barley, all from Alamosa (about three hours away). Cinder Dick is a single-barrel Bourbon, aged two years in 53-gallon, #4-charred oak from Kelvin Cooperage. It is bottled at 94°. Retail is $57.00 and the current distribution is limited to Colorado. There are plans to expand to New Mexico very soon.

I'd like to thank Durango Craft Spirits for providing me with a sample of Cinder Dick in exchange for a no-strings-attached, honest review. Time to #DrinkCurious...

In my Glencairn glass, Cinder Dick appears as a deep burnt umber with red highlights. It looks like it could have been finished in an ex-Cabernet cask, however, we know that's not true because the rules of Bourbon wouldn't allow it. That would be the #4-char helping out.  It left a very heavy rim on the wall and generated fat drops that didn't really go anywhere.

Aromas of oak, coffee, and sawdust were prevalent. What was noticeably missing was any ethanol, especially considering how young this Bourbon is. Beneath those notes was a suggestion of cherry and plum - until I brought the glass directly under my nostrils, and then the stone fruits really jumped at me along with spearmint. When I inhaled through my lips, it was a blend of caramel and mint leaf.

I found the mouthfeel to be light and airy.  On my palate, Cinder Dick was very oak forward, with a light caramel underneath. But, at mid-palate, all that oak went away and it was an explosion of chocolate-covered espresso beans.  When I say explosion, I mean exactly that. It completely took over. On the back, the espresso toned down and tobacco leaf was left behind.

The finish was originally short and started with dry oak and black pepper. When I wondered what happened to it, it returned and became the Energizer Bunny, and brought back the espresso bomb.

Bottle, Bar or Bust:  I wanted this to be a fun review. I hate to admit it, but I was secretly hoping Cinder Dick would be bad because that would give me so much more ammunition to make juvenile jokes. Unfortunately (or, rather, fortunately), Cinder Dick was a very nice surprise. I'm not a coffee drinker, and I enjoyed the heck out of it. So did Mrs. Whiskeyfellow, and she's not much of a coffee drinker, either. If you are, this is going to be your mojo. The price is not offensive for craft whiskey and when you take all of this into account, Cinder Dick earns my coveted Bottle rating. Cheers!