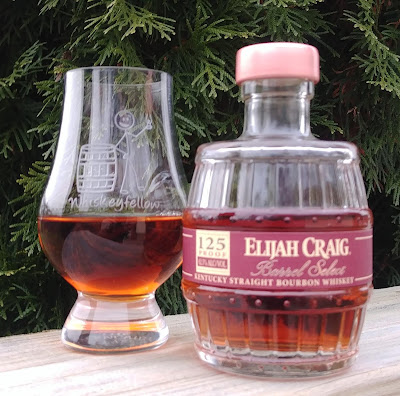 Elijah Craig is a name in Bourbon that carries a long, storied tradition.  First of all, he is credited with being the Father of Bourbon.  At least that's how the legend goes.  The Reverand Elijah Craig was a Baptist minister who was involved in a variety of business enterprises, including distilling. However, truth be told, there is no evidence beyond nostalgia that suggests Elijah Craig actually invented Bourbon. But, he was certainly an early force in the art.

Elijah Craig the brand hit shelves in about 1986.  It started off as a 12-year Bourbon, which was something new for Heaven Hill.  Their goal was to get beyond the less-than-positive opinion of its whiskeys and turn the company around. It then moved into an 18-year, and from there, older expressions.

Laying down my cards on the table, I'm admittedly an Elijah Craig fanboy. I buy Barrel Proofs and Single Barrel store picks as I come across them.  I have more than I probably should.  I've known about the Elijah Craig grenades, which is really called Barrel Select, for a few years.  But, I've never tried a bottle, that is, until a very recent trip to Kentucky.  I had two bottles on my list that I wanted to purchase when I took my trip, this being one of them.

Barrel Select is not Elijah Craig Barrel Proof, but it is entry proof (meaning, it is the same proof as what goes into the barrel before any aging occurs).  It carries no age statement, although it is assumed to be between eight and nine years, and is the typical mash of 78% corn, 10% rye, and 12% malted barley.  It only comes in 200ml bottles that are shaped like a barrel, but fit in the hand like a grenade, hence, the nickname.  It is bottled at 125° and costs about $25.00. The only place to buy them is from the Heaven Hill gift shop. You're only allowed one per person per visit.

Will Barrel Select live up to the Elijah Craig reputation? The only way to find out is to #DrinkCurious.

Appearance:  Poured neat in my Glencairn glass, Barrel Select appears as a deep, dark amber. It left a very thin rim on the wall that created fat, wavy legs.  Those legs certainly took their time crawling back to the pool.

Nose:  I didn't even have to bring the glass near me to start picking up the aroma of caramel. Once I brought it to my face, it was that caramel and a small amount of mint. Underneath the mint was cinnamon. When I held the rim just under my nose, aromas of cherry and oak filled my nostrils.  When I inhaled through my lips, it was warm vanilla with cinnamon.

Palate:  The initial sip was thick and coating. It was also packed a wallop of a punch. I've been drinking Elijah Craig Barrel Proof since I've really been into Bourbon, and until you get into the super-heavy proofs, I've not felt this much of a kick as what Barrel Select delivered.  But, once I got past that punch, it was a mouthful of berries at the front.  At mid-palate, it became like thick caramel with cinnamon. On the back, it was clove and oak.

Finish:  And, that clove and oak held on for the finish, which was quick and dropped off without warning. My initial feeling was a disappointment, as Elijah Craig never delivered me that, not even in its rather mellow 18-year expression. Just before I went to take another sip, that clove and oak raced back for another round, sticking around only a little bit longer, almost like a tease.  I did notice, however, that my lips were tingling. And, I noticed cherry that was left behind on my palate.

Bottle, Bar, or Bust:  I already admitted I'm an Elijah Craig fanboy. While the finish initially left me disappointed, when it came back again, I found that interesting. When the oak and clove fell off the second time and left the cherry behind, it turned my frown upside down.

When you consider the price of $25.00, it seems affordable, until, of course, you do the math and realize it is the equivalent of an $87.50 750ml bottle. That becomes expensive for what it is. However (and this may be the fanboy providing justification), it is $25.00 for a very cool experience that would probably last you four pours. And, that's cheaper than going to a bar, in which case you wouldn't find Barrel Select anyway.  As such, my recommendation is to buy the one Bottle you're allowed to the next time you're at the distillery.  Cheers!


My Simple, Easy-to-Understand Rating System:
Whiskeyfellow encourages you to enjoy your whiskey as you see fit but begs that you do so responsibly.
Posted by Whiskeyfellow at 6:00 AM