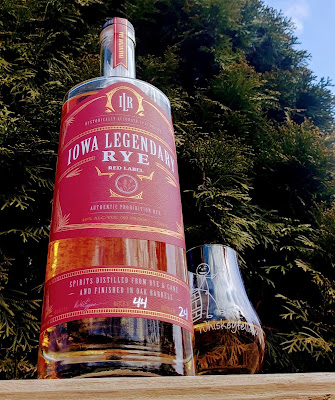 Iowa has a rich bootlegging history. Unlike many of the moonshiners of long ago, who distilled (and distributed) in secret, in Iowa, particularly around Carroll County, the local economy depended heavily on it and entire towns were in on the operation.  Oh, it was still illegal as hell, but when the revenuers came, the whole town was in on making sure there was denial, deflection, and distraction. It went from the moonshiners to the pastors and from the police to judges. Everyone was in on the game.

Recently I was in Carroll and had an opportunity to meet with the folks at Iowa Legendary Rye and was shown around by Rich, Alec, and Max. There were a lot of things said to me in confidence that I promised I would not publish and you know what my integrity means to me. In other words, if I'm not talking about it, don't ask because I won't tell. And, if you don't see a photo of it, it is because I agreed not to photograph it. Nothing illegal, just trade secrets.

Speaking of illegal, this recipe goes back to 1931 and unlike many backstories that are just tall-tales, Rich is the real deal. Things with Iowa Legendary Rye went legal in 2014. 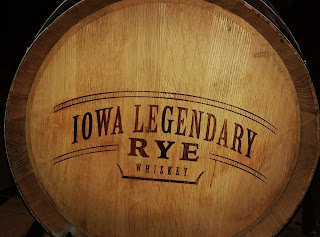 The distillery is located in a nondescript one-story building in downtown Carroll.  You could drive right by the place (I did) and not even know the building housed a distillery. This is a true micro-distilling operation. Iowa Legendary Rye prefers to use the term small batch which is descriptive but as many whiskey people know, the term has no legal definition. Micro-distillery is much more accurate.

Ingenuity is key at Iowa Legendary Rye.  Handmade tooling, home-made stills, and a ton of growing-up-in-the-moonshine-business things are how it is done. I saw stuff that distilleries have spent tens of thousands of dollars on that Rich, the guy who has been doing this since he was a kid, spends $20 on parts from the local hardware store and it works just as well, if not better. I found myself laughing - not at them - but just in jaw-dropping shock with what they're doing compared to what I'm used to seeing. 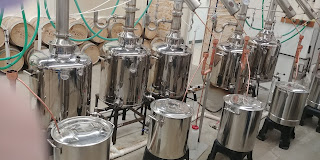 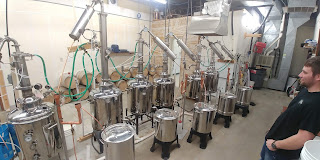 It starts off with the grain. Everything except the barrels and bottles come from Carroll County. They're using 100% organic rye and a bit of cane sugar.  There are no enzymes used at all. The rye is then ground and then fermented in 53-gallon, food-grade plastic barrels. They're distilling about 50 or so gallons a day. 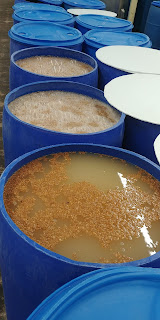 First, there is their white whiskey. It is proofed down to 80° and this is the base for everything Iowa Legendary Rye puts out, including the vodka. For what it is worth, I tried both.  The white whiskey lacks any heat and goes down way too easy. The vodka is distilled twice and then charcoal-filtered (using one of those $20 contraptions I mentioned earlier). It is fruity with grape, melon, and berry - something that I don't run across often in vodka.


Everything is aged in 15-gallon, #5 charred oak barrels. That's right, #5 char. Those barrels are aged between 18 and 24 months before being bottled on-site using a very small, hand-bottling machine.  I got to visit the equally non-descript rickhouse. 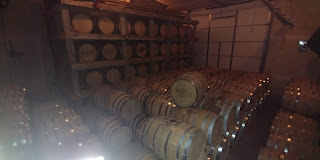 I want to thank Rich, Alec, and Max for both the private tour and the sample for a no-strings-attached, honest review of the Private Reserve.

Private Reserve is essentially Aged Rye that is then aged a second time in used cooperage.  Retail is about $69.00 and it, like everything else (except Patriot) is bottled at 80°.  Is an 80° Rye that many people have never heard of worth $69.00?  The way we find out is to #DrinkCurious.  For the record, I'm pouring Batch 44.

In my Glencairn glass, Private Reserve appeared as the color of chardonnay. It left a very heavy rim that created medium-fat legs to drop back to the pool.

Even before the glass got anywhere near my face, the aroma of buttered popcorn was in the air. Coming closer, brown sugar joined the game. I discovered a slight evergreen (not to be confused with juniper) quality, and then vanilla cream. When I inhaled through my lips, a flavor I'm fairly certain I've never used in a whiskey review before: buttermilk.

A thin but coating mouthfeel greeted my palate. There was no burn factor whatsoever. At the front, I picked up caramel and (again) buttered popcorn. Come mid-palate, those flavors melted into both vanilla and chocolate. Then, on the back, a healthy dose of rye spice and tobacco leaf, with just a touch of coconut.

The long finish of charred oak, cocoa, and black pepper built fast without becoming overwhelming. I did discover that my hard-palate started to tingle, perhaps because I was casually sipping without long pauses in between.

Bottle, Bar or Bust:  The question I asked earlier was, Is an 80° Rye that many people have never heard of worth $69.00?  This, like the white whiskey, went down way too easy. It has an enticing nose, and while it had some familiar rye notes on the back and finish, the front- and mid-palates were on the unusual side for Rye, especially the buttered popcorn. This is something I could sit on my zero-gravity chair on my deck and smile while drinking. And, it may even be a bit dangerous due to how easy it is to enjoy.


$69.00 is on the pricey side for true craft whiskey and for that, it needs to do something different. Iowa Legendary Rye accomplishes that task and does it in a great way. As such, it snags my coveted Bottle rating.

On a parting note, I'm learning that Rye and used cooperage make an excellent combination - not just Iowa Legendary Rye but other brands as well.  Cheers! 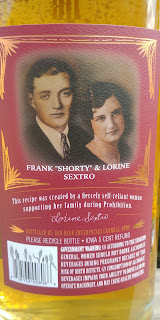 Posted by Whiskeyfellow at 6:32 AM