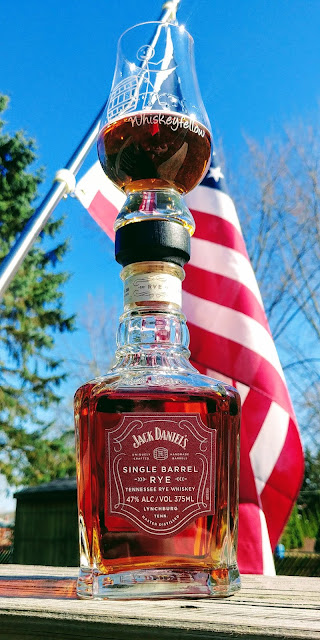 Jack Daniel's has been around for what seems to be forever. In fact, they've not changed their mashbill since 1866, back when 14-year old Jasper "Jack" Daniel started his own distillery in Lynchburg, Tennessee, producing a charcoal-mellowed whiskey after learning his art from Reverend Dan Call and slave Nathan "Nearest" Green. Back then, the mash was 80% corn, 12% malted barley, and 8% rye. That's remained unchanged through today.

Except in 2012, Jack Daniel's started tinkering around and released its Unaged Rye, using a mash of 70% rye, 18% corn, and 12% malted barley. That then led to Rested Rye in 2014. Neither were greeted with big accolades. But, then, in 2016, the Single Barrel Rye release started to turn heads.

The Rye goes through the same Lincoln County Process (LCP) that its world-famous Tennessee Whisky does. That involves filtering newmake through ten feet of sugar maple charcoal prior to barreling in new, charred oak. This LCP is supposed to mellow the whiskey.

As a single barrel whiskey, every release is going to be at least slightly different. It carries no age statement, although it is rumored to be between four and five years old. It is packaged at 94° (although barrel proof is newly released). A 750ml bottle runs around $55.00.

If you're thinking that $55.00 seems a lot for a four or so-year American whiskey, keep in mind that American Rye tends to mature faster than its Bourbon counterpart, and four years is plenty adequate in most cases.

Appearance:  In my Glencairn glass, this Rye was a bright, clear amber color. It left a very thin rim but generated fat, wavy legs to drop back to the pool of liquid sunshine.

Nose:  Stewed fruits and a hint of mint started things off on the nose. Aromas of brown sugar and toasted oak was next. And then, strangely enough, I smelled corn. When I inhaled through my open lips, minty vanilla rolled across my tongue.

Palate:  The mouthfeel was soft and silky. I picked up no ethanol burn. The first flavor to hit my palate was sweet, creamy vanilla. The mint was absent. Mid-palate was rye spice and corn (again). On the back, it was muted oak.

Finish:  As light as this whiskey was, it had a surprisingly long finish. Pepper and smoky oak started the show, and it ended with, and I can't believe I'm saying this, corn. Corn? Corn is only 18% of the mash. It blows my mind that corn would be a heavy player in something other than a barely-legal Rye.

Bottle, Bar, or Bust:  This whiskey had a very interesting, appetizing nose. It had a nice mouthfeel. The palate was not complicated and lacked any real panache. The corn was baffling, making for a very different American Rye. As most people who follow me know, different is something that's typically appealing. However, different also has to be exciting. The heavy corn presence was distracting and, frankly, I found this Rye boring and not worth $55.00.  As such, it takes a Bust. Cheers! 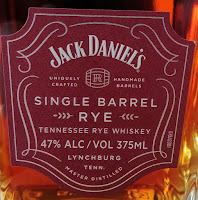