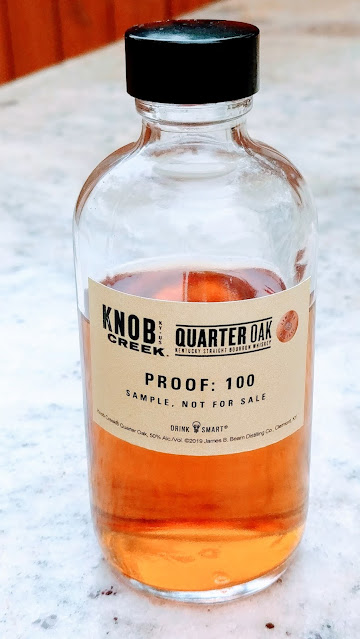 I love it when distillers get curious and want to do something different. It isn't as if there isn't enough choice in the Wonderful World of Whiskey, but I enjoy the whole experimentation aspect. I want to see (and taste) what outside-the-box ideas they can come up with.

When Knob Creek announced they were going to release a small barrel Bourbon, it piqued my curiosity. It involved taking their standard Knob Creek Bourbon, made from a mash of 75% corn, 13% rye, and 12% malted barley, but instead of aging it in a standard 53-gallon barrel, it used what's called a quarter cask, which is only 13 gallons, and let it rest for four years. The smaller barrel gives a greater contact surface area between whiskey and wood. It is one way to accelerate the aging process.

Instead of leaving it at that, Knob Creek then took that quarter cask and blended it with their standard Bourbon aged in a traditional barrel.  The end result is called Knob Creek Quarter Oak.

Bottled at 100°, Quarter Oak carries no age statement. Suggested retail is $49.99 for a 750ml and this is a limited edition offering. But, does limited edition mean it is worth chasing down?  I'll be honest - while I've enjoyed Knob Creek's limited editions in the past, I've found them overpriced for what they are. That hit a crescendo with the 25th Anniversary Release, which was essentially nothing more than a good store pick of Knob Creek 120 at three times the price.

While the bottle is a media sample, it was passed along by a fellow reviewer and I did not get it directly from Knob Creek. Time to #DrinkCurious and find out if it is anything special...

Appearance:  Poured neat in my Glencairn glass, Quarter Oak appeared as a dull, golden amber. It left a thin rim that created fat, slow legs to drop back to the pool.

Nose:  The first thing to hit my nostrils was rose perfume. It was a bit overwhelming. However, once I got past that, I found a blend of dried fruit and caramel. Underneath that, leather was evident. When I inhaled through my mouth, apple and pear caressed my palate.

Palate:  The mouthfeel was thin and coating. Thick, sweet vanilla and cream greeted the front of my palate. That led to dry oak and leather at my mid-palate. Then, on the back, it became black pepper and barrel char.

Finish:  I found it long and building. It started with black pepper and finished with very dry oak.

Bottle, Bar, or Bust:  I am a big fan of Knob Creek 120.  I've said a few times that it is one of the most underrated Bourbons around. While it is a single-barrel Bourbon, I use it as a bellwether for other Knob Creek releases. I found Quarter Oak to be very atypical of what I've found in Knob Creek 120s, especially concerning the sweetness level at the front, and it was enjoyable. While this is slightly more expensive than Knob Creek 120 and is only 100°, it isn't obnoxiously priced like the 25th Anniversary or the 2001 Series. In all, Knob Creek Quarter Oak comes in as a net positive and earns my coveted Bottle rating.  Cheers!

My Simple, Easy-to-Understand Rating System:
Whiskeyfellow encourages you to enjoy your whiskey as you see fit but begs that you do so responsibly.
Posted by Whiskeyfellow at 6:00 AM