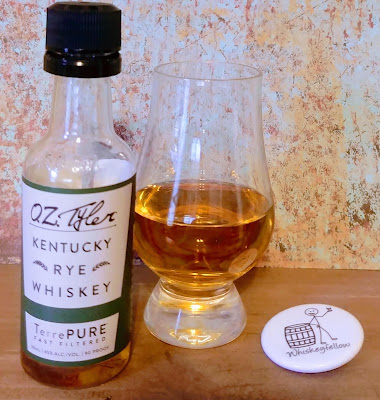 I have tasted many whiskeys that use some sort of rapid aging technique. Some distilleries go for smaller barrels. Others try to create artificial seasons by cooling their rickhouses in the summer and heating them in the winter. Others add staves, chips and other wood inside the barrels.

When I was shopping around Kentucky, I saw a 50ml of O.Z. Tyler Kentucky Rye Whiskey. I saw the TerrePURE Fast Filtered label and didn't think much of it. Fast filtered and rapidly aged sound like two entirely different things, yet as it turns out, they are one and the same. What TerrePURE is, exactly, I don't know for sure, but when I did a web search, it came up as Terressentia Corporation. And, as that turned out, they own Terrepure Kentucky Distillers.  Then, if you go to their webpage, you discover they are really Angostura, the company famous for making bitters. If you go to O.Z. Tyler's website, they'll tell you absolutely nothing about their spirits. So much for transparency.

What O.Z. Tyler will provide is a history of their distillery, starting with 1880 when founded as the Eagle Distillery, to its relocation in Owensboro and subsequently renamed Green River Distillery to a host of hurdles including bankruptcies, Prohibition, changing of hands, etc.  They'll also tell you about brands the distillery used to make but lost the rights to, but, again, don't talk about their own distillate.

What some sleuthing did tell me was that TerrePURE is a patented system of somehow replicating three years in the barrel, but having it actually age only twelve hours. That's interesting, except that O.Z. Tyler states their Rye is aged a minimum of six months.   This becomes a curiosity... if you can simulate aging three years in twelve hours, how does that translate to six months in #4 charred oak?


This and several other questions will be answered shortly. O.Z. Tyler Kentucky Rye retails for about $20.00 and is bottled at 90°.  The mashbill is undisclosed, but we know it must be at least 51% rye.  How does this super-aged whiskey hold up?  Time to #DrinkCurious.

In my Glencairn Wee Dram glass, this Rye presents as a very pale amber, almost like what you'd expect in a naturally-colored Scotch. It left a medium-thick rim and fat, slow legs that worked their way down to the pool.

Aromas of oak and sawdust were predominant, which was followed by mint and then, finally, anise. When I inhaled through my mouth, it was a blend of wintergreen and mint.

The mouthfeel was thick and creamy.  The palate was difficult to discern. It started with a slight citrus, a dusting of oak and... that's it. There was nothing really going on with it. The medium-length finish was creamy and was mostly white pepper with again, that slight citrus.

Bottle, Bar or Bust:  When you race a product to market, very rarely does it mimic Mother Nature. In the case of O.Z. Tyler Kentucky Rye, the TerrePURE process may have been productive but the results were not attractive. It did not taste like a well-aged whiskey at all. As such, this one is an easy Bust.

Cheers!
Posted by Whiskeyfellow at 6:31 AM