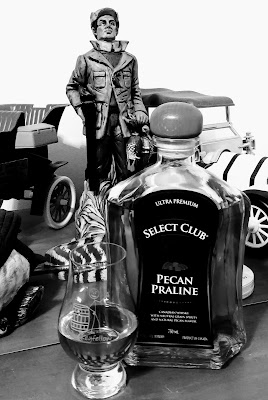 Flavored whiskeys... I've been trying to have a more open mind regarding them, particularly since I've tasted some shockingly good ones. But, if I'm going to be intellectually honest with myself, I don't go in with much expectation. That allows me to be less disappointed when they taste phony and, to me, is a ploy to sell bad whiskey by drowning it in flavor. But, it also allows me to be happy when I'm wrong.

When a local distributor asked me to try Select Club Pecan Praline Ultra Premium Whisky, I was more open-minded than usual. The first pecan flavored whiskey I tried was William Wolf Pecan Bourbon and I found it enjoyable. When I saw Select Club was Candian Whisky mixed with neutral grain spirits, that open door creaked shut just a little bit. For the record, neutral grain spirits are akin to vodka, but can basically be anything that is pure grain alcohol distilled to a very high level of ethanol.

Select Club is owned by a company called Mextor, a family-owned company located in Houston. They don't do any actual distilling as far as I could tell, rather, they just import various wine, beer, and spirits and then distribute to 46 states.

Mextor bills this as something that is "a tasty shooter, great straight, or pairs perfectly with other flavors to serve up an amazing cocktail." It is bottled at 70° and has a suggested retail of $17.99. The actual distiller is undisclosed, and considering there are over 250 working distilleries in the country, your guess is as good as mine who it actually is.

So, is Select Club good, bad or ugly? The only way to answer that is to #DrinkCurious. Here we go...

Appearance:  In my glass, Select Club appears as a pale amber. It left a thick rim on the wall of my Glencairn, which led to fat droplets that stuck like glue and never really went anywhere.


Nose:  Within about a foot of my face, the aroma of pecan pie greeted my nostrils. No matter where I positioned my glass, it always came up as pecan pie, both the nuttiness and the sweetness. When I stuck my nose inside the glass, I was able to pick up mild ethanol, but it required work to find it. Interestingly enough, inhaling through my mouth brought absolutely nothing:  no pecan, no ethanol, nothing.


Palate:  Select Club had an incredibly thick mouthfeel, almost like drinking cream. In fact, the more I sipped it, the thicker it became. As expected, pecan and brown sugar dominated the palate. There was a certain wood quality that I would not define as oak, but also not to be mistaken by either nuts or nutshells.


Finish:  A medium-long finish was made of brown sugar, cream, and smoke. And, on a side note, when I ran my tongue across my lips, I picked up more brown sugar, which seemed to reboot some of what was on the palate.


Bottle, Bar, or Bust:  Select Club Pecan Praline Ultra Premium comes with a very un-premium pricetag. Inexpensive is nice so long as it isn't cheap. I can see sipping this with many non-whiskey drinking friends and having them enjoy the hell out of it. It would make a nice campfire drink. Mrs. Whiskeyfellow enjoyed it so much she informed me we were buying a bottle, so we did. And, that, my friends, means this gets a Bottle rating. Enjoy this one, cheers!


My Simple, Easy-to-Understand Rating System:
Posted by Whiskeyfellow at 6:00 AM