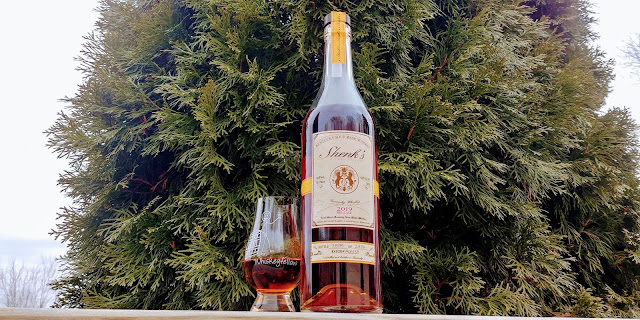 If you've never heard the name John Shenk, then you've missed one of the pioneers of American distilling. You have to go all the way back to Pennsylvania in 1753, when Shenk, a Swiss Mennonite farmer, started distilling rye. His whiskey was purchased by some obscure guy named George Washington, who gave it to his troops during the Revolutionary War when stationed at Valley Forge.

Shenk's distillery changed hands many times, most famously to Abraham Bomberger, who renamed the distillery after his family name. For the record, Bomberger and Shenk were distant relatives. The Bomberger Distillery continued to operate until 1919 when a bunch of bad people gave us Prohibition. The distillery reopened in 1934 by Louis Forman, and after briefly selling it, repurchased it again with partners from Schenley Distilleries.  And, then, the most famous family in American whiskey got involved with Master Distiller Charles Everett Beam. Beam and Forman created a pot-still whiskey they named Michter's Original Sour Mash, named for Forman's sons Michael and Peter. Yeah, Michter's Distillery.

Coming back full circle and here I am reviewing Shenk's Homestead Kentucky Sour Mash Whiskey which is distilled by Michter's. This is a vintage-stated American Whiskey, meaning each year the whiskey inside is different from the previous year. The mashbill itself is undisclosed. I can make educated guesses as to what grains are used, but it is classified neither as a Bourbon nor a Rye, and as such, we can assume both corn and rye are less than 51% of the content.  It also carries no age statement. What is unique is the distillate was aged in Chinquapin barrels.  If you're like me and had to Google the term, it is a type of beech tree.  After aging, it is dumped and Michter's proofs it down to 91.2°. Retails starts at around $69.00.  I picked up my bottle at a charity auction.

How's Shenk's taste? The only way to know for sure is to #DrinkCurious, so let's get at it...

Appearance:  In my Glencairn glass, this whiskey presented as a deep chestnut. I don't have a familiarity with what beechwood does to whiskey, but the color was very inviting. It left a medium rim and fast, heavy legs to drop back to the pool.

Nose:  Aromas of stone fruit filled the room. In fact, the stone fruit was prevalent from the second I pulled the cork. That was married with barrel char and dark chocolate.  As I continued to explore, I picked up rye spice, citrus, and brown sugar.  The blending of these smells really made my mouth water. When I inhaled through my lips, it seemed like honey rolled over my palate.

Palate:  An oily and thin mouthfeel led to a somewhat complicated palate. At the front, it was as if I bit into a dark chocolate bar, one very heavy on the Cacao. It was joined by mace. Strangely, as it moved to mid-palate, it became orange candy and charred oak. Then, on the back, it was a union of tobacco leaf and cocoa.

Finish:  The long-lasting finish consisted of orange peel, clove, and dry oak. It was warming but nothing to set my mouth on fire.

Bottle, Bar or Bust:   I'll get right to the point here. I think Michter's knocked this one out of the park. I loved every bit of Shenk's and it is one of my favorite American whiskey pours of 2020. The price is less than obnoxious and, frankly, I believe it can compete with more expensive whiskeys that I've had in the last year or so. As such, it snags the coveted Bottle rating. Cheers!


My Simple, Easy-to-Understand Rating System:
Posted by Whiskeyfellow at 6:28 AM