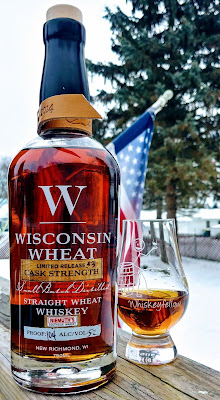 Sometimes the world hits you over and over with the "same" thing trying to deliver a message. Just two days ago, I was sipping Dry Fly Washington Straight Whiskey and here I am today trying 45th Parallel's "W" Wisconsin Straight Whiskey. Normally, trying the same category of whiskey is no big deal. I'll go several days in a row doing Scotch, Bourbon, or Rye. But, the wheat whiskey category isn't all that deep. To have an opportunity for multiples in a short period of time is unusual.

To set the record straight, there's a big difference between wheated Bourbons and wheat whiskeys. Wheat whiskey is, generally speaking, just that. Wheat. Distilled wheat lends a softening quality to what it is mixed with (corn, rye, barley, etc.) but for the most part, it is tasteless. People who enjoy the "sweetness" of wheated Bourbons are tasting more of the corn. The wheat itself isn't sweet.

Today's whiskey is a Niemuth's Southside Market pick called Grand Master Flan. You've probably read several of my reviews about various Niemuth's picks. They're located in Appleton, Wisconsin, and do a good job overall. In full disclosure, I was on the selection committee for this pick. And, I also want to say that I've been impressed with much of what 45th Parallel does. Not only do they distill their own spirits, but they also do contract distilling for several brands. 45th Parallel is in New Richmond, Wisconsin and has been distilling since 2007. They're not newbies to the distilling world.

Grand Master Flan is the first "W" release that is available at cask strength. In this case, that translates to 104°. It carries a 70-month age statement which differs greatly from the standard release. On average, "W" is four years old or a bit more. It is distilled from a mash of Wisconsin-grown wheat and aged in new, 53-gallon #3 charred oak barrels. Grandmaster Flan comes from Barrel #31, and retail is $49.99, which is right around average for craft whiskey.

Is Grand Master Flan another great pick? Time to #DrinkCurious and find out!

In my Glencairn glass, Grand Master Flan appears as a deep amber. On the wall of the glass, it left a heavy rim that created fat, slow legs that stuck in place before eventually giving up and dropping back to the pool.

Aromas of grass, wheat, and fresh bread were immediately identified. As I continued to explore the nose, oak and mint came about, and then, finally, red apple. When I inhaled through my lips, crème brûlée rolled across my tongue.

A thin but coating mouthfeel took me aside, especially after considering the rim and legs. It was also quite spicy. The first flavors to hit my palate were dark chocolate and what I initially thought was red grape, but after subsequent sips, became more meaty and ashy like Merlot wine. Then, in the middle, was the namesake flavor: flan. That gave way to cinnamon and honey on the back. The Merlot quality continued over my entire palate before fading.

The medium-short finish was a blend of flan, dry oak, black pepper, and prunes. It was absolutely a unique combination that did take some acclimation.

Bottle, Bar, or Bust: Grand Master Flan was definitely out of the ordinary. If you've been following me for any length of time, you know I get excited over different. As I say that, however, it is important to know that different isn't always great and has to work. The flan was strong. Perhaps it was a subliminal message that caused me to pick it up. I can also see how Grand Master Flan would make a stimulating base to a number of cocktails. There's enough going on with it that would be delectable and certainly stand out from a basic Rye or Bourbon.

Grand Master Flan is, especially for a wheat whiskey, very complex on both the nose and palate. Those reasons, along with the distinctive finish is why I selected this barrel. I believe you'll enjoy it as well, and as such, it takes my Bottle rating. Cheers!

Posted by Whiskeyfellow at 6:54 AM