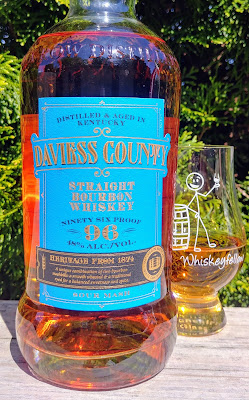 One of the things I find entertaining about Bourbon is the history behind it.  I'm not necessarily speaking of tall tales and marketing backstories, although those can be fun, too. Rather, I'm talking about real history. When I come across a new whiskey, I try to learn what I can about it - whether that is the history of a distillery or the reason behind the name of a whiskey.
Joseph Hamilton Daveiss had an interesting background. He became a lawyer in 1795 and appeared in court as someone you'd think of from the movie Deliverance. He got involved in a duel in 1799 and wound up becoming a fugitive.  And, yet, he was also the first lawyer west of the Appalachian Mountains to litigate a case before the US Supreme Court.
Daveiss then became a US District Attorney based in Kentucky. He wound up getting a burr (pun intended) under his saddle regarding Aaron Burr. He tried many times to prosecute Burr for treason but was never successful.
In 1811, Daveiss volunteered to serve in the Indiana militia, where he was placed in charge of the entire Indiana calvary as well as two companies of dragoons. He led them into battle at Tippecanoe, where he died from his injuries.
At this point you're probably wondering if I've got a spelling error regarding his name. For whatever reason, anything named after Daveiss has been spelled Daviess, including a county in Kentucky. In that county was a distillery called Daviess County Distilling Co., one of the original Kentucky distilleries.
Leave it to Lux Row Distillers to resurrect the name and create a line called Daviess County Bourbon. There are currently three expressions:  Kentucky Straight, French Oak, and Cabernet Sauvignon. Today I'm reviewing Kentucky Straight.
Kentucky Straight is made from two different Bourbon mashbills: wheated and traditional rye. Although Lux Row has been distilling for a few years, the whiskeys used in this marriage are sourced and, while undisclosed, Luxco (Lux Row's parent company) has a history of sourcing from Heaven Hill.  It also carries no age statement, but since it is Straight, we know it is at least two years, plus that no age statement cranks it up to at least four. It is bottled at 96°, and retail is $39.99.
I'd like to thank Lux Row Distillers for sending me a sample in exchange for a no-strings-attached, honest review. On a side note, I want to say that what Lux Row sent me is one of the nicest sample packages I've come across.

And now, time to #DrinkCurious to discover what matters...
Appearance:  In my Glencairn glass,  Daviess County Kentucky Straight appeared as caramel in color. It left a very thin rim that led to very thick, fast legs to drop back to the pool of liquid sunshine.
Nose:  The first aroma to hit my olfactory sense was cinnamon. That was followed by lightly-toasted oak. As I continued exploring, it grew sweeter, with molasses, vanilla, and peach.  When I inhaled through my lips, I found what could best be described as peach cobbler.
Palate:  I found the mouthfeel to very oily. There was a mild warming sensation. I'm curious which char level was used because this is smokier than I anticipated, especially considering the nose.  At the front, that became a big deal. Mid-palate, oak, and stewed fruits became evident. Honey, vanilla, and caramel made an appearance at the back.
Finish:  Extremely long in duration, this finish starts off with peaches and honey. It then shifted to dry oak and clove which seemed powered by the Energizer bunny. I'm talking for many minutes. I was shocked at how quickly 96° numbed my hard palate.
Bottle, Bar, or Bust: The more I sipped Daviess County Kentucky Straight Bourbon, the more convinced I became at least one of the Bourbons used in the blend was Heaven Hill-sourced. The wheater was less obvious, but Heaven Hill has that mashbill, too, and as far as I know, I've not tasted a blend of the two.
This Bourbon is definitely off the beaten path. That's something that always grabs my attention, good or bad. In this case, I found it to be the former. While not mind-blowing, it is flavorful and keeps you focused on that never-ending finish. When you factor in $40.00 for a 750ml, this one becomes an easy Bottle recommendation.  Cheers!
My Simple, Easy to Understand Rating System:
Posted by Whiskeyfellow at 6:34 AM