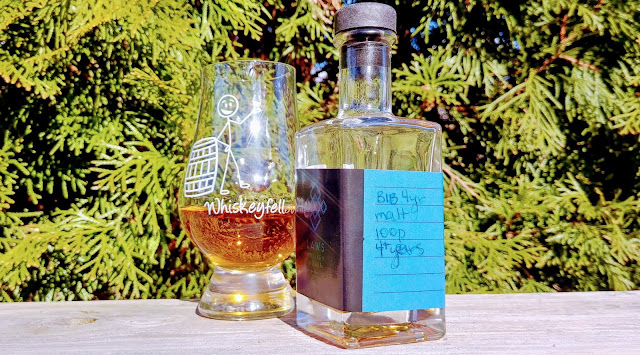 American Malt Whiskey is the future.  Oh, I don't have a crystal ball or anything. But, I do see the segment growing by leaps and bounds. Several years ago, I might have told you American Malt was an unmitigated disaster. But, as of late, this category has matured and I've really enjoyed a lot of what I've tasted.

When Laws Whiskey House approached me with their Henry Road Bonded Malt Whiskey, I was absolutely intrigued. First of all, it was Bottled-in-Bond. With me, that's an attention-getter. If you are unfamiliar with Bottled-in-Bond, it has some simple rules:  It must be a product of the United States. It must be from a single distilling season (January to June or July to December), distilled by a single distiller at a single distillery. It must be aged at least four years in a government bonded warehouse. It must be bottled at 100°, no more, no less. Finally, the label must state where it was distilled and, if bottled elsewhere, who bottled it.


Second of all, I've found Colorado Single Malts to be very hit-or-miss. I've not had an American Malt from Laws before and was curious how they'd handle it.


Laws' goal was to have a "terroir-driven, unapologetic whiskey." To accomplish that, it uses a mash of 100% heirloom malted barley from Colorado Malting Company in Alamosa. The grain is grown along Henry Road, hence the name of the whiskey.  Colorado Malting handles the malting of the barley as well. Laws uses open-air fermentation tanks and a copper pot-column still.  Meeting the guidelines of Bottled-in-Bond, it ages this whiskey for four-plus years in new, 53-gallon charred oak barrels. Retail is approximately $74.99 and distribution is currently limited to the Colorado market.


I'd like to thank Laws Whiskey House for providing me a sample of their Henry Road Bonded Malt Whiskey in exchange for a no-strings-attached, honest review. And now, let's #DrinkCurious and get to it, shall we?


In my Glencairn glass, Henry Road appears as a bronzed amber. It created a thin rim that shockingly generated no legs. The rim and the droplets it created just glued in place.


Aromas of chocolate filled the room while I was allowing the whiskey to rest. When I was ready to investigate further, honey and chocolate were dominating. Further exploration provided a light mint mixed with oatmeal. When I inhaled through my mouth, it was all Granny Smith apples racing across my palate.


The mouthfeel was thin and oily. Subsequent sips never thickened the viscosity. There was also nothing in terms of alcohol burn.  Flavors of almond and brown sugar started off, and as it moved mid-palate, I found a lovely combination of salted caramel and cocoa. On the back, it was a mixture of green apple and very sweet tobacco.


A very long finish provided strong coffee flavor along with charred oak. While there was (again) no alcohol burn, it didn't stop my hard palate from numbing.


Bottle, Bar or Bust:  As I started off saying, American Malts out of Colorado have been hit-or-miss with me. Henry Road Bonded Malt Whiskey had a very aromatic nose and complex, somewhat unusual palate. I really enjoyed this one and was a bit disappointed with how quickly I burned through my sample. But, I was also grateful for the experience. The cost is a bit shocking until you consider that single malt whiskey is typically more expensive than Bourbon or Rye. It is also a limited edition whiskey. I would prefer to see this priced about $10.00 less, but considering how much pleasure I received for Henry Road Bonded Malt Whiskey, I'd still rate it a Bottle. Cheers! 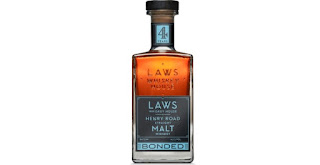 Bottle = Buy it
Bar = Try it first
Bust = Leave it
Posted by Whiskeyfellow at 6:36 AM