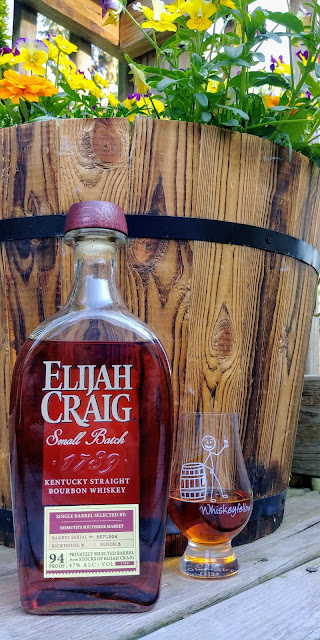 If you've followed my reviews for some time, you know that I have some biases. That's right, I'm human. But, I admit them. And, today I'm going to admit another.
I enjoy the hell out of Elijah Craig.
That shouldn't be a surprise. This is something I've stated for a few years now. I stumble upon Elijah Craig store picks and for me, it is almost always a no-brainer. And, I'm going to give you a spoiler - I love the one I'm reviewing today. But, what's important is what makes this store pick worthwhile.
If you're unfamiliar with Elijah Craig (hey, everyone is new to something sometime, right?), it is distilled by Heaven Hill in Bardstown, Kentucky. Heaven Hill uses a mash of 78% corn, 10% rye, and 12% malted barley. It is then poured into #3-charred oak barrels.  With average retail of less than $30.00, it is also a very affordable investment. That's the standard release that you'll find on every store shelf.
Then you get into the Single Barrel program (don't be fooled by "Small Batch" on the bottle, they use the same bottle for their Small Batch and their Single Barrel program). In the case of today's review, it is a store pick by Niemuth's Southside Market in Appleton, Wisconsin called Good Carma.  Good Carma aged in Rickhouse V on the third floor for 11 years, 11 months, and 11 days. It came out of the barrel at 122.9° and then proofed down to the standard 94°, giving a yield of 228 bottles. Retail is $28.99.
I'd like to thank Niemuth's for providing me a sample of Good Carma in exchange for a no-strings-attached, honest review. With that said, it is time to #DrinkCurious.
Appearance:  In my Glencairn glass, Good Carma appeared as a very orange amber. While the rim it left was very thin, the legs were fat and wavy.  When they dissipated, droplets stuck to the side like glue.
Nose:  Things started off with brown sugar and vanilla. From there, I found cherries and cinnamon. At the end, it was oak and dried, sweet fruit.  When I inhaled through my lips, caramel-coated cherries flowed across my palate.
Palate:  Here's where things get interesting. The mouthfeel was thick and heavy. At the front, it was a total caramel bomb. There was nothing else to contend with. No matter how many sips I took, I could not get past the caramel.  But, once it hit mid-palate, I tasted a combination of hazelnut, vanilla, and sweet corn.  Then, at the back, toasted oak and brown sugar.
Finish:   Medium in length, I was left wishing it would go longer. It was a blend of toasted oak, white pepper, and caramel.
Bottle, Bar or Bust:  My rating is no surprise since I let the cat out of the bag early.  But, Good Carma is dangerous. It goes down way too easy. On one of the warmest, most humid days of the year so far, it could be enjoyed on the back deck without causing any discomfort. There was no real warmth to speak of. This is the kind of Bourbon that doesn't even require effort to get a Bottle rating from me.  Grab it, you can thank me later.  Cheers! 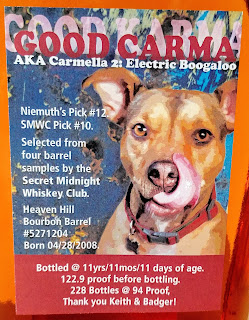 My Simple, Easy To Understand Rating System:
Posted by Whiskeyfellow at 6:04 PM