A little over a year ago, I reviewed a standard release of La Crosse Distilling Co.'s High Rye Light Whiskey.  It was the first decent Light Whiskey I'd tasted and earned somewhere between a Bar and Bottle rating. I've passed the bottle around to several people and the reviews were mixed. Some people really enjoyed it, others said it was decent but not great. I don't recall anyone saying it was lacking. But, that also validated my rating.
If you're not familiar with La Crosse Distilling, it is a craft distillery in (you guessed it) La Crosse, Wisconsin. It uses only organic, locally-grown ingredients, and the still is powered by geothermal energy, making it very earth-friendly.  It makes gins, vodkas, rock & rye, and light whiskey.  Barrels are sourced locally from Staggemeyer Stave Co., located 20 minutes southwest of the distillery. They're currently aging Bourbon and other whiskeys.  Their Light Whiskey is a mash of rye and wheat.
Today, I'm reviewing another High Rye Light Whiskey from La Crosse Distilling. What's different about this one?  Well, this one aged one year and a day in used Wisconsin Full Boar Straight Rye barrels. This was a collaboration between La Crosse Distilling and Niemuth's Southside Market in Appleton, and as such, it is exclusively available at Niemuth's.  The barrel yield was 125 90°-bottles and can be purchased for $29.99. Niemuth's decided to name this one Reboar'n.
I'd like to thank Niemuth's for providing me with a sample in exchange for a no-strings-attached, honest review. So, let's get to it. Time to #DrinkCurious.
Appearance:  In my Glencairn glass, this Reboar'n appears the color of straw. It left a very thin rim on the wall of my glass, and that rim never generated any legs. The rim just stuck like glue.
Nose:  Despite its aging for a year, it still had the aroma of buttered popcorn like many new-make whiskeys do. It lacked any alcohol vapor to the face. I found light oak and then, surprisingly, caramel. My guess is that caramel came from the previously-barreled rye.  When I inhaled through my lips initially, I tasted nothing. However, after repeated attempts, a hint of citrus materialized.
Palate:  The mouthfeel was creamy and coating. It also smacked my hard palate hard, which took me aback. I had to remind myself that this is only 90°!  Up at the front was an obvious rye spice dusted with cinnamon. As it moved to the middle, I tasted floral and citrus notes. It was an interesting combination. The back was all dry oak.
Finish:  My throat was warmed by a very long, spicy finish of clove and rye.  I would estimate it lasted just beyond three minutes before it began to wander off.  Clove is something I find appealing in whiskey, and that brought a smile to my face.
Bottle, Bar, or Bust:  Because of the high-rye mash and ex-rye barrel aging, Reboar'n took on a lot of rye character, much more than the original version I tasted last year. If you really enjoy spicy rye, then Reboar'n is going to be a Bottle rating for you. If you haven't delved much (or at all) into Light Whiskeys, you may want to try this one first (giving it a Bar rating).  Cheers! 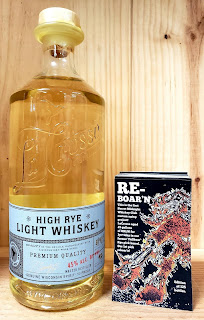 My Simple, Easy to Understand Rating System:
Posted by Whiskeyfellow at 6:37 AM