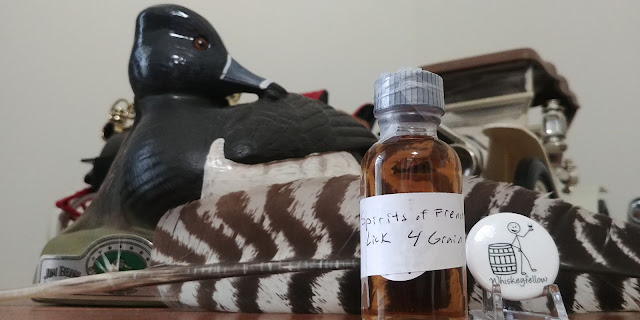 Small distilleries can be a ton of fun. Nothing at all against the big dogs, I have a fine appreciation for what they do. But, small distilleries allow for great innovation and experimentation that can lead to a unique tasting experience. And, you know me, I'm big on unique.
Spirits of French Lick is one such distillery. They don't even call themselves craft. Instead, the term artisan is used. It is located in Indiana and is attached to the French Lick Winery in West Baden. Alan Bishop is the master distiller. They distill Bourbon, American Whiskey, Brandy and botanical spirits, and claim it is in pre-Prohibition fashion. By locally sourcing their grains, they use what's on theirs and neighboring farms, keeping it all in Indiana.
Today, we're talking Bourbon, and in this case, it is Lee W. Sinclair 4-Grain Bourbon. Who is this Lee W. Sinclair, and why is his name on a Bourbon label?  Sinclair was a turn-of-the-[twentieth] century businessman in West Baden. He built a hotel in 1902 which became known as the Eighth Wonder of the World. It wasn't just a hotel - it had a casino, a two-deck covered bike and horse track, and an opera house. The hotel burned down, but the legacy remained.
As far as the Bourbon is concerned, despite the fact it says Indiana Straight Bourbon Whiskey on the label, this is not MGP or anyone else's distillate. It is double-pot distilled on-premises and made from a mash of 60% corn, 17% wheat, 13% oat, and 10% caramel malt. There are two yeast varieties designed to pull different flavors. Fermentation takes four days. It has a lower entry proof of 105°, then placed in #2 charred new 53-gallon American oak barrels, which are toasted prior to charring. The barrels then age in its Chai/Cellar, which has a lower standard temperature than an average rickhouse.  When ready, it is bottled at 90° and retails for about $34.00.
I obtained my sample of Lee W. Sinclair from a friend seeking my opinion. How's it taste? Time to #DrinkCurious.
Appearance:  In my Glencairn glass, this Bourbon appeared brassy. It had a thin-to-medium rim that created fat, slow droplets to fall back to the pool.
Nose:  As I brought the glass to my face, I immediately picked up the smell of malt. As I hovered it under my nostrils, I found sweet vanilla and butterscotch. A light waft of milk chocolate joined in. Hidden beneath all of that was citrus. Inhaling through my lips brought the return of malt.
Palate:  When I tipped the glass for my first taste, it felt very thin in my mouth. There was no real burn to speak of, which is nice to experience at 90°. An additional sip increased its weight as it became creamier, likely due to the oat content. Sweet corn was obvious at the front and carried through mid- and back-palate. As it crossed zone-to-zone, I could pick out vanilla on the front, cherry mid-palate, and toasted oak on the back. I could not describe this as complicated and, if anything, the opposite was true. It didn't require much to figure it out.
Finish:  The finish was toasted oak and caramel. The caramel outlasted the oak, giving it, overall, a medium-length one.
Bottle, Bar, or Bust:  This is an easy-sipping whiskey. That matches my experience with other Spirits of French Lick whiskey. There is nothing harsh about it. If I wanted to introduce a friend to four-grain Bourbon, this could be a good starting point. It offers a different experience from a wheated Bourbon, thanks to the oat and caramel malt, and lacks any real spice due to a lack of rye.  The $34.00 price tag is on the low side of average for craft (or in this case, artisan) whiskey. Yeah, it is only two years old, but I can easily picture myself drinking this on my deck during a warm summer evening. If you're not big on rye Bourbons, I would offer my Bottle recommendation. If you prefer more of a punch, I'll give it a Bar. Cheers!

My Simple, Easy-to-Understand Rating System:
Posted by Whiskeyfellow at 6:35 AM