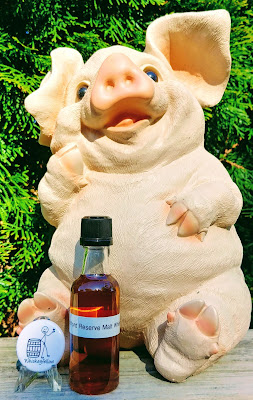 I've really been enjoying malt whiskeys lately.  Sure, I've always had a thing for Scotch, it was my introduction to whiskey many moons ago. When I first tasted American malts, I was not a fan. I may have set myself up for disappointment though because I expected American malt to smell and taste like its Scottish and Irish counterparts. It took me a few years of continuing to #DrinkCurious to accept and understand that American malts were not going to be, nor were they designed to be, competitors to Scotch and Irish whiskeys.
There is also something to be said for quality. When American malts started to become a "thing" the quality was lacking. They were either harsh or under-proofed. It seemed like distillers were exploring what they could or should have been doing and, of course, using us as guinea pigs.
Eventually, distillers seemed to have a better understanding of how to create malt whiskeys, both in the distillation and aging process. There are many high-quality American malts on the market. This is exciting because this is a fast-growing category.
When invited by Woodford Reserve to review their Kentucky Straight Malt, I jumped at the opportunity. The background on Woodford's whiskey is as follows:

Coming out of Prohibition, the Federal Government approved four straight whiskey standards: Bourbon, Rye, Wheat, and Malt. These reflected the types of whiskeys produced in the United States prior to Prohibition.  While most people associate malt whiskey with Scotland, Kentucky has a pre-Prohibition history of malt whiskey production. Woodford Reserve Malt draws upon this heritage for inspiration.

It is triple distilled and made from a mash of 51% malted barley, 47% corn, and 2% rye. It was aged in new, charred oak barrels, just like Bourbon or Rye would be. Going with a barely-legal (meaning 51%) malt content in addition to the high corn, it is obvious Woodford is targeting Bourbon drinkers, and that's perfectly fine. This whiskey carries no age statement, but as a straight whiskey we know that's at least two years, and with no age statement, that means at least four. Bottled at 90.4°, Woodford plans to keep this as part of its core offering. The suggested retail is $34.99 for a 750ml bottle.
I'd like to thank Woodford Reserve for providing me this sample in exchange for an honest, no-strings-attached review. And now, let's get to it.
Appearance:  In my Glencairn glass, the color appeared as a definitive orange amber. It was clear and inviting. It generated a medium-thick rim that stuck to the wall like glue. Eventually, gravity took over, and fat droplets worked its way back to the pool.
Nose:  From the moment I opened the bottle, this whiskey was very aromatic. As I gave it an opportunity to breathe, it continued to fill the room with sweet apricot and Honeycrisp apples. Once I brought my glass to my face, the fruitiness only got stronger, this time adding in raisin and dried cherry. Candied nuts came next, followed by toasted oak, then, finally, chocolate. When I inhaled through my lips, vanilla and honey rolled across my tongue.
Palate:  The mouthfeel was thin yet creamy. It was almost like clarified butter. At the front, it began with black pepper and oak. At mid-palate, things became fruity, with coconut and pear. On the back, it was a marriage of dark chocolate covered nuts.
Finish:  The finish started off softly and then built to a quick crescendo of cocoa and oak. Pepper from the front of the palate returned to give it a nice, spicy thump. Overall, it was medium in length.
Bottle, Bar, or Bust: I absolutely loved the very complex nose. It was almost like someone blindfolded me, took an Irish whiskey and Bourbon, placed them side-by-side, and asked what kind of whiskey I had in front of me. The palate was less complicated, but that's fine.  Personally, I would have preferred the finish to last longer, but that's not a knock, rather, I was enjoying the flavors and didn't want them to end.
It is difficult to say Woodford Reserve Malt is atypical of American malt because the category is all over the place. However, it was very different from any other American malt I've had. Perhaps that was the influence of the corn. Regardless, I think Woodford has a winner here, with or without it being easy on the wallet. Awarding this my Bottle rating is a no-brainer. Cheers!
My Simple, Easy-to-Understand Rating System:
Posted by Whiskeyfellow at 6:32 AM